Who hasn't read about the stories of Minotaur, Theseus or Daedalus and Icarus?
Now you know where all these stories took place. 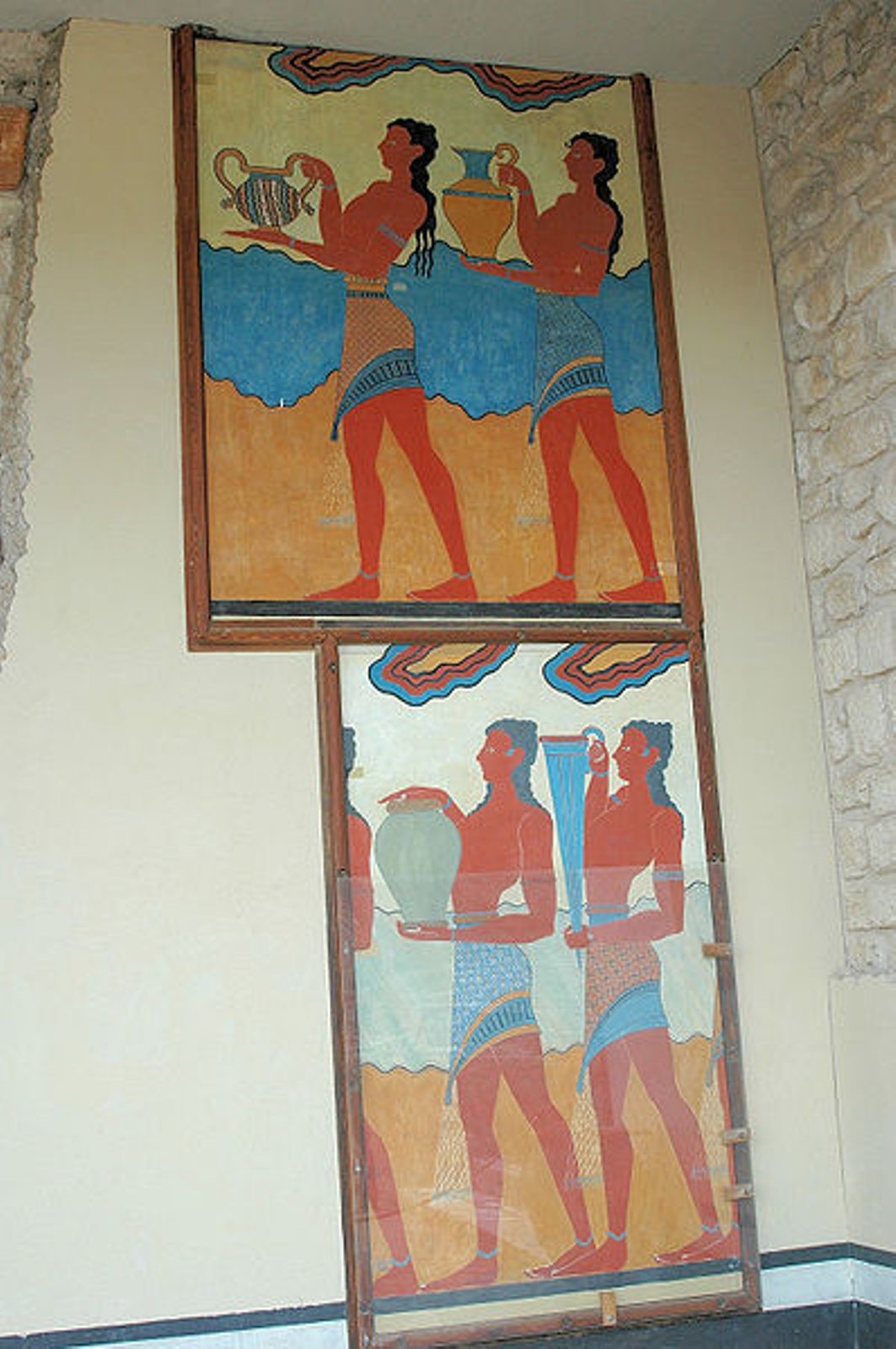 Procession frescoeKnossos was the most important city on Crete before the Roman Era and the center of the first brilliant European civilization, the Minoan. The palace of the city is the most visited archaeological site in Crete with more than 1.000.000 visitors per year. The palace is located just 5km south of Heraklion, atop hill Kefala next to the banks of Knosano Gorge. It can be accessed via Knossos Avenue, which connects Heraklion with Skalani village. Apart from the palace itself, the area is full with several more archaeological finds, which makes sense considering that Knossos was a town with more than 100,000 people. 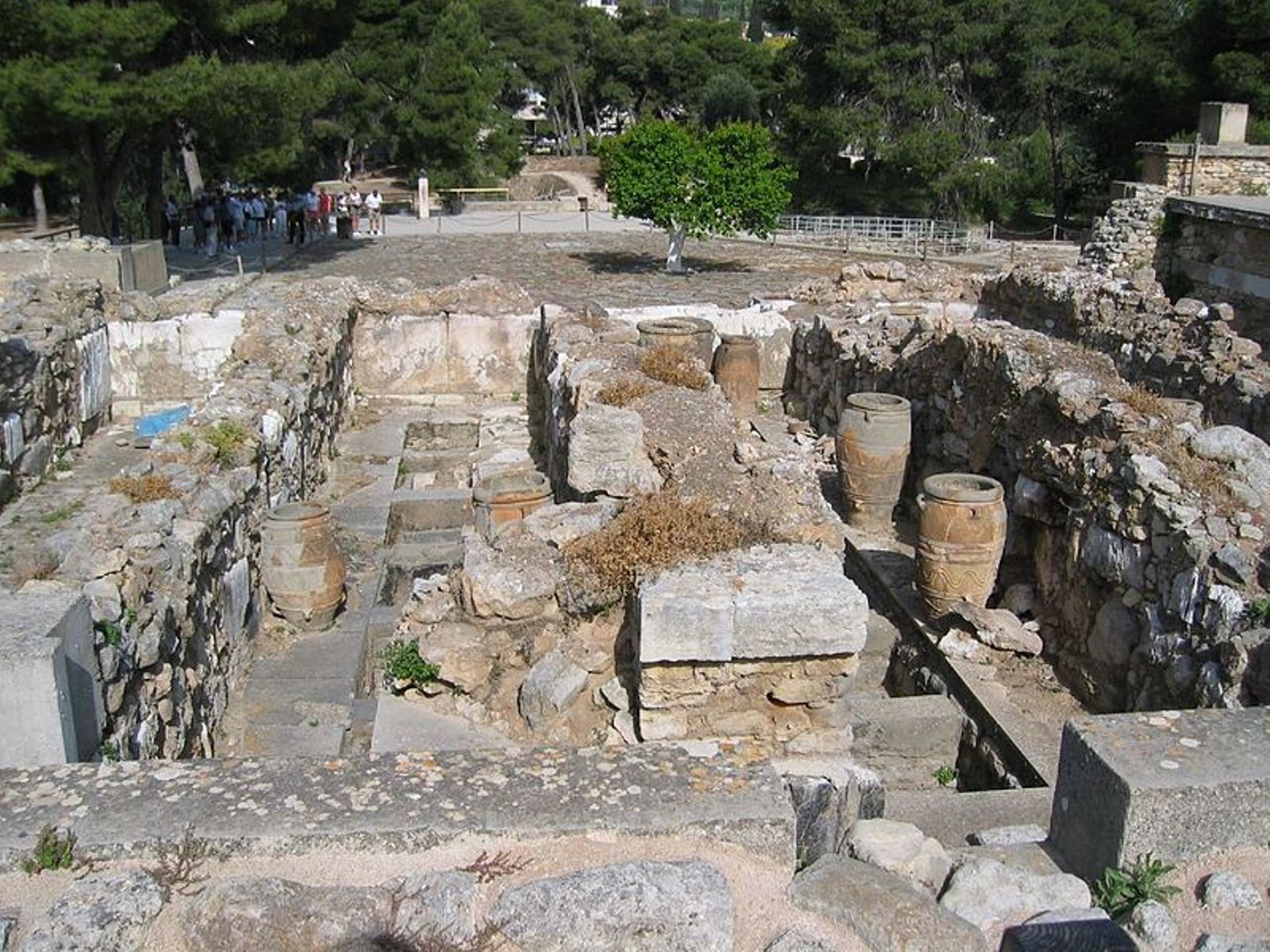 Magazines and potsThe palace was the seat of the legendary King Minos and has been associated with famous Greek myths, like that of Daedalus and Icarus, the Labyrinth and the Minotaur. Minos was not a person, but a series of kings with the same name (as we say Pharaoh in Egypt). He was deified and he was thought to be the son of Europa and Zeus, as described in the story of the Rape of Europe.

The palace of Minos was the heart of the city of Knossos, with constant presence in the historical events of Crete from the Neolithic era till the early Byzantine era. The first excavations at Knossos were made by the Cretan archaeologist Minos Kalokerinos in 1878, who found many old storage pots and other objects. 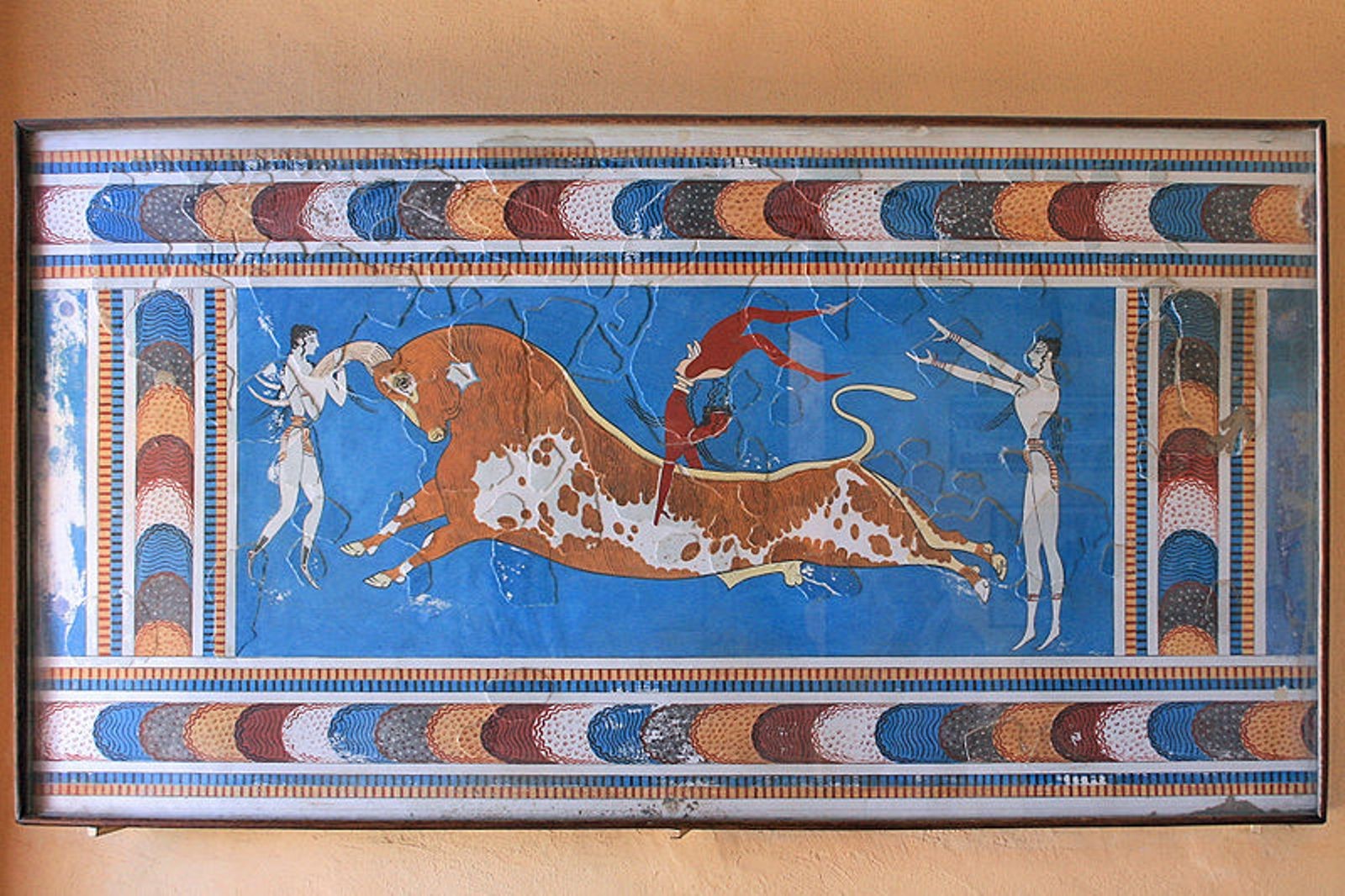 Tavrokathapsia ceremony in frescoeHowever his work stopped shortly due to the Cretan – Turkish wars and was later continued by the Englishman Arthur Evans. The work of Evans started in 1900 and was completed in 1930, with the end of his restorations. Evans has received harsh criticism because of the large-scale restoration works in the palace using cement. However, one can discern that the perception of the palace today would not be so good, if all buildings were kept torn down, as found by Evans.

The earliest traces of habitation date back to the Neolithic period (7th-4th millennium BC). Later, the place was inhabited till 1900BC when the old buildings were demolished to give room for building a bigger palace. The new palace occupied area of ​​22 acres and appears to have been destroyed by an earthquake in 1700BC. On the site of the old palace, the most magnificent Minoan palace ever was built. In 1600BC an earthquake caused severe damages, which were repaired very quickly with the addition of several new buildings. This specific palace version is the main palace we see today in the archaeological site of Knossos. In 1450BC the palace suffered a devastating damage caused either by an earthquake or a tsunami caused by the eruption of Santorini volcano. Later, when the Achaeans arrived in Crete (1350BC) the palace was flattened forever. However, the city of Knossos continued its history till the 500BC.

Knossos remained the most powerful city on Crete for several centuries after the destruction of Minos Palace. It competed several other Cretan cities, like Gortys (the next capital of Crete during the Roman times) and Lyttos. In 221-219AD Knossos campaigned against Lyttos and flattened it, while its men were missing in another campaign. However, Gortys gradually increased its power and became the new capital of Crete.

The coins of Knossos, which you can see in Heraklion Archaeological Museum, depict the Minotaur, the Labyrinth, ancient gods, etc. Symbol of Knossos was labrys (double ax), while the double bull horns were the symbols of Minoan religion.

The palace of Knossos is archaeological site can be accessed by bus from the center of Heraklion. On the west side, just after the entrance of the site, you will see the halls of the ceremonies, the storage rooms and the great throne room. On the opposite side, there are the royal rooms, while the north side housed the rooms of the artisans of Knossos. You will see frescoes, pots, objects, etc., throughout the palace, replicas of the real which are exhibited in the museum of Heraklion. 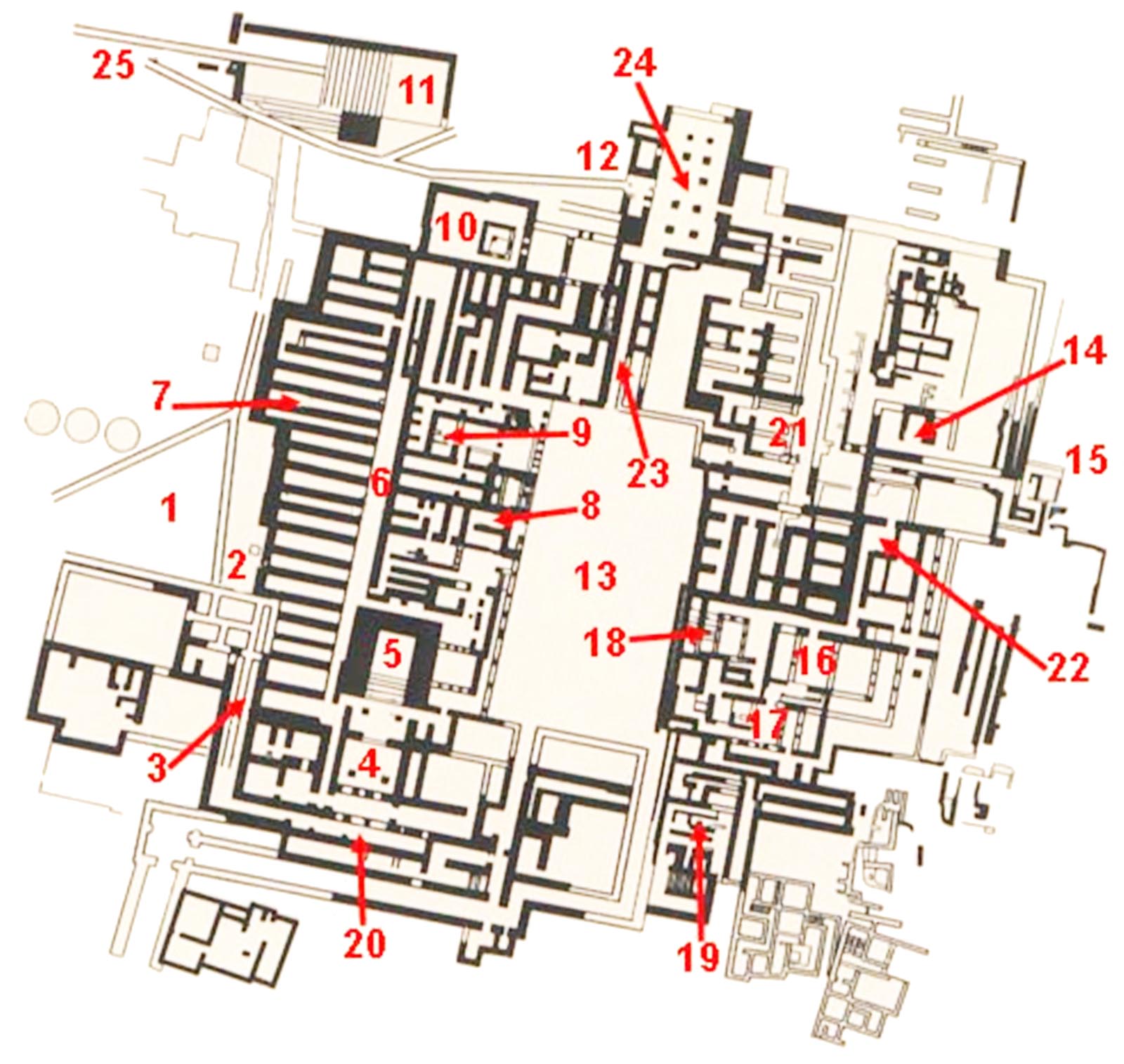 The entrance to the palace is on the west court (1) with the west Entrance (2) leading to the processional aisle. Here you will see a copy of the procession fresco found in this area and the south Propylaeum (4) with the dual bull horns. The horns are a symbol of Minoan religion, and therefore are met in many places in the palace. 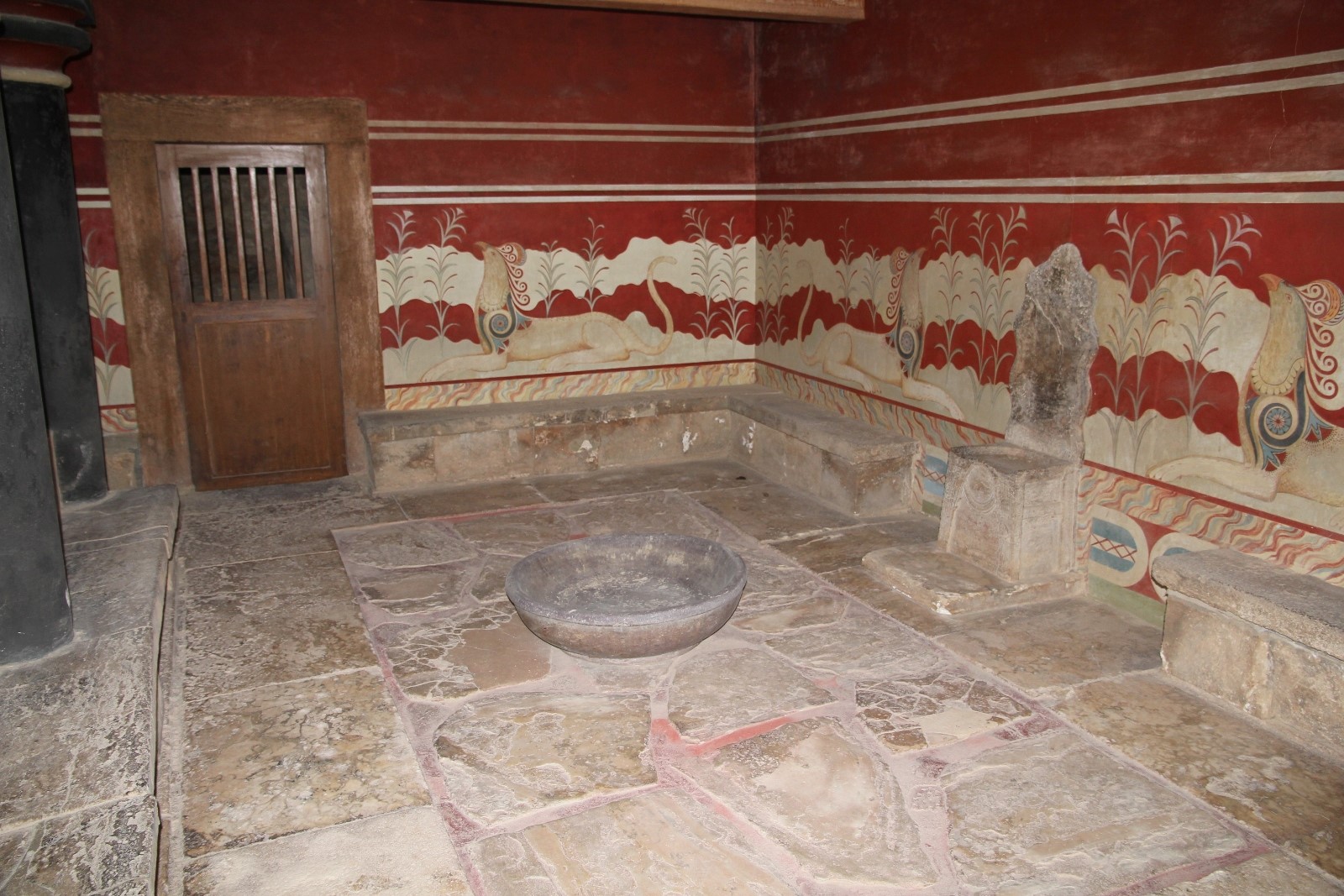 In the hall the procession, you will see a copy of the mural of Prince with the lilies, now exhibited in Heraklion Museum. On the west, you will find the eighteen storehouses of the palace (7), built perpendicular to the corridor of the warehouses (6) and the giant store pots. 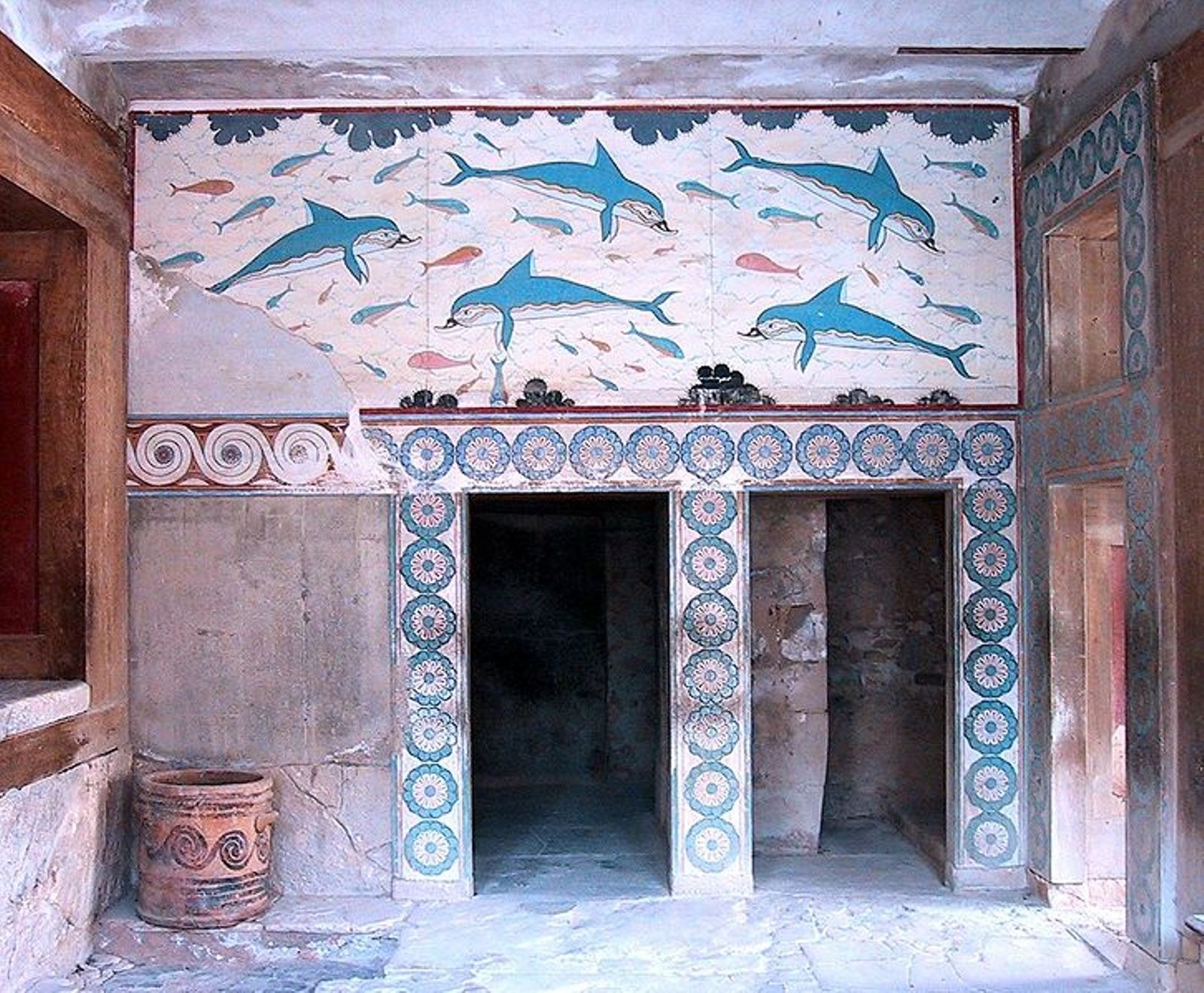 Queen's Room and the Dolphins' frescoeEast of the Great Court, there is the Grand staircase (18) leading to the Royal Rooms. Eastward, you will see the Hall of Double Axes (16) and a corridor leading to the Queen's Room with its magnificent fresco of dolphins. Further north there are the royal warehouses and the corridor of draughtboard (21), a kind of chess that was found in this position and is presented today at the Museum of Heraklion.

Another corridor, the North (21), runs parallel to the corridor draughtboard and leads out of the palace. You will see the first building that someone first saw when arrived in Knossos, called Customs Office (24), the lustral basin (10) and the Theatre (11). From the theater starts a paved road (25) leading to the Small Palace of Knossos, while south of the warehouses there were several workshops (22).

Church of Saint Paraskevi at Sellopoulo

Church of Michael Archangel at Kaminos

Church of All Saints at Aorakia

Memorial for Kidnap of General Kreipe