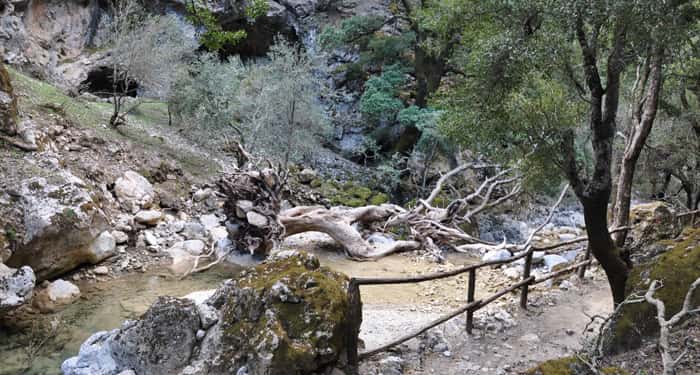 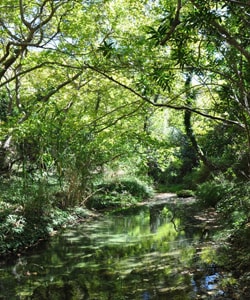 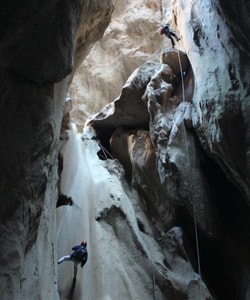 The gorge of Agios Nikolaos, Gafaris or Rouvas is bounded by the peaks of Ambelakia from east and Samari from west. This is the most important gorge of Psiloritis and central Crete and took its name from the homonymous Byzantine church in the south entrance. This is an ecosystem with rich flora and fauna, smaller canyons and interesting geological formations and cliffs of rare beauty.

The canyon Aposelemis exits at the settlement Agrianá (or Adrianna as its inhabitants call it). It is the longest and most important geological canyon in the northern part of the prefecture of Heraklion.

Agiofarago Gorge (meaning Gorge of Saints) is located in south of Odigitria Monastery and has been shaped near the beds of two streams. The first stream starts north - northeast of Gyalomonochoro and the other starts northeast of the Odigitria. The two streams meet, near St Kiriaki and after following a relatively smooth path, west and south of Church St. Kiriaki, it arrives in Porofarango, where the main gorge of Agiofaraggouo starts and ends at the Libyan Sea, at a small but amazing beach.

There are several places in Crete that are beautiful, but only a few of them can be described as winders of nature. A place that is a real wonder of nature is the gorge of Arvi that tears Arvion Mount in two, over which the shrine of Zeus Arveios was sited.

Kounaviano canyon is the richest (in vegetation) gorge in the prefecture of Heraklion, a real oasis in the center of the province Pediada. The name comes from the village Kounavi. It is a tributary of the river Karteros and runs parallel to Astrakiano gorge, with which in merges at position Kaki Rachi by Skalani and then form the Gorge of Karteros.

The gorge of Trypiti is formed at the range Asterousia, to the south of the village Vassiliki. The length of the canyon reaches 4 km and a beautiful pebble beach is formed at its exit. The beach is reached though a dirt road that runs high along the eastern side of the canyon for several kilometers before reaching its riverbed, just before the exit to the sea.

Astrakiano and Kounaviano canyons are two lush green gorges by Heraklion that merge near the village Skalani and carry on their united course till Karteros. The total length of the two canyons is about 21 km.