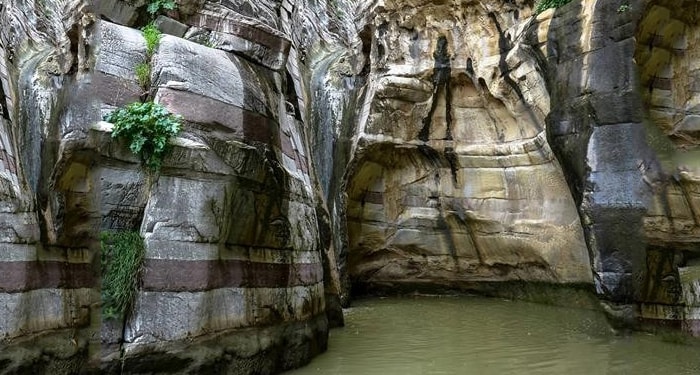 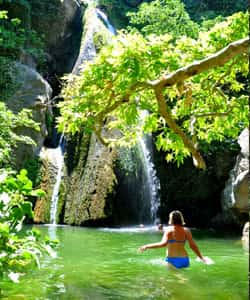 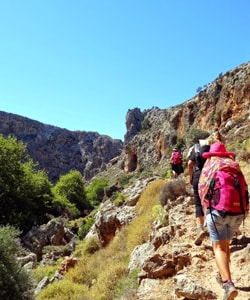 In the warm and dry area of East Crete, most gorges dry up during the summer, however there are a few green oases, such as the canyon Richtis with the impressive waterfall. The Dikti Range is home to some very impressive canyons, with the most popular being Sarakina by Mythi, Kritsa, Adrianos, Havgas by Kalamafka and Havgas at Lassithi Plateau. Some more impressive gorges, surrounded mainly by pinewood, are located on Mount Thrypti. Among them, the canyons of Pefki, Orino, Ahlia and Mylonas are the most popular. The area of Zakros is dominated by the eerie canyon of the Dead, which takes its name after the Minoan graves found in its cavernous walls. Other local gorges are the dry canyons Katsounaki, Lamnoni, Saint Irene and Pervolakia. North Mirabello district area also hosts some less known canyons, ideal for easy hiking, such as Kouroukoulos, Havgas by Plaka and Skotini. Apart from hiking, Lassithi also hosts some imposing technical canyons (crossed only with equipment) with the most famous being the wild canyon of Ha by Ierapetra.

The amazing gorge of Richtis is located in Lasithi Prefecture, on the north side, between Agios Nikolaos and Sitia. It starts just outside the village Exo Mouliana and ends at the Richtis beach, east of the village of Kalabro. The total length of the route is approximately 3 kilometers and the elevation difference between the starting point and the beach is about 350 meters. The gorge, even in summer, has enough water, which is used by locals.

The Gorge of Mylonas or Agios Ioannis is located 18km east of Ierapetra. It starts near the village Agios Ioannis, at an altitude of 500m, and ends at the beach of Kakia Skala.

One dominant feature of the area of Ierapetra, in front of the beautiful village and the minoan settlement of Vassiliki is the Gorge Ha. It is considered one of the wildest gorges in Crete, a rare morphological phenomenon of nature, probably caused by tectonic earthquake.

16km west of the Ierapetra is the traditional village of Mythi. In a short distance from the village, the small Sarakina Gorge starts, which ends near the Mirtos. The length of the canyon reaches 1.5km and its width ranges from 3 to 10 meters, with only a few points exceeding that.

The beautiful Gorge of Kato Zakros (or the gorge of the Dead) starts in a short distance from Ano Zakros, nearly 100km southeast of St. Nicholas, and ends at Kato Zakros. The beauty of the landscape, the historical importance of the gorge and its accessibility, attract many visitors every year.

Kritsa Gorge starts near the picturesque village of Kritsa, 9.5km southwest of Agios Nikolaos and ends at the village Tapes. It’s 4km long, reaching a width of only 1.5m in some places. It is easily accessible with a few points that need attention, where you have to climb over some big rocks (not too hard). The only time you should not visit the gorge, is when it has rained previously and there are ponds in the gorge, which block the passages.

The Gorge of Pefki (Pefki means Pines) is one of the most beautiful small gorges of Crete, with amazing rock formations shaped by the natural forces and with lush vegetation. The length of the gorge is 4.5 km and the elevation difference of the entering point and the exit reaches 300 meters.The gorge starts south of the village Pefki and ends in Aspros Potamos dorp, 2km north of Makrigialos.

Through the gorge passes Havgas river that carries water from the plateau of Katharo to Lassithi. Then the water reaches Chonos (the hole from which waters of the Lassithi Plateau escape the plateau), comes out from Fleves and reaches Aposelemis dam. The river has water for several months a year. Thus, make sure you get properly informed about the weather because the canyon carries a lot of water during periods of rainfall.