Memorial for Kidnap of General

Next to the junction of Patsides and opposite the historical temple of Saint Sozon we meet a memorial. This weird memorial column commemorates the kidnap of General Heinrich Kreipe, maybe the most important military operation in Crete in 1944. The kidnappers stopped the car of the General at this point and started their timely course till reaching the south coasts of Crete and deliver the General in Egypt. The Kidnap was an operation by the Special Operations Executive, an organization of the United Kingdom.

On 1 March 1944, Kreipe was appointed Commander of the 22nd Air Landing Infantry Division operating on Crete, replacing General Friedrich-Wilhelm Muller, who had been made the German commander in Chania and who had a reputation for brutality towards the Cretan people. The SOE team of Major Patrick Leigh Fermor and Captain William Stanley Moss had planned to abduct Muller, but when he was replaced, proceeded with their plans and targeted Kreipe instead. Helped by Cretans resistance fighters, Georgios Tyrakis and Emmanouil Paterakis, Leigh Fermor's team successfully abducted General Kreipe and managed to evade the German troops searching for them. After a cat-and-mouse style pursuit by German troops, the SOE team reached the coast where they were picked up by the Royal Navy and taken to Egypt. 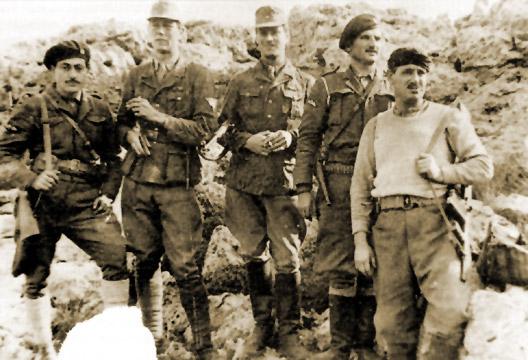 The British and Greek team of AbductionThe British Army and allied forces from various countries of the British Commonwealth had been driven out of Crete after the Battle of Crete in May 1941. Following the evacuation of the surviving British forces, the Special Operations Executive landed agents on the island to assist and advise the Cretan resistance movements. They had a number of objectives including liaison, intelligence gathering, preparing the local resistance and assisting escapers and evaders to leave the island.

Major Patrick Leigh Fermor and Captain William Stanley Moss hatched the plan in Cairo for the abduction of General Friedrich-Wilhelm Muller, the military governor in Crete and commander of the 22nd Airlanding Division. Muller had a reputation for brutality and was despised by the Cretan people, and the Special Operations Executive planned to kidnap him and transport him to Egypt.

Leigh Fermor’s strategy was to undertake a bloodless operation that would be attributed to British forces alone in order to avoid direct reprisals being meted out against the Cretan population. In this, he was successful.

On 4 February 1944, Major Patrick Leigh Fermor and Captain William Stanley Moss and two Cretan SOE agents, Georgios Tyrakis, Emmanouil Paterakis, left Egypt by plane for Crete. Their intention was to parachute into Crete but after arriving at the drop zone, only Leigh Fermor was able to parachute successfully. The others had to abandon the attempt due to bad weather and were returned to Egypt. On landing Leigh Fermor was met by a group from the Cretan resistance, with whom he remained until the arrival of the rest of the SOE team. Moss and the other two tried three more times by aircraft to land and eventually, after two months of attempts they arrived by Motor Launch ML 842 on 4 April 1944. They were met on the beach Dermatos by Leigh Fermor and another SOE agent, Sandy Rendel. Their target General Muller was replaced by General Kreipe on 15 February just before they arrived by sea (Muller replacing General Brauer in Chania as Commander of Fortress Crete). They decided, nevertheless, to go ahead with their plan with General Kreipe now their target.The SOE team now included a number of Cretans; Antonios Papaleonidas "Wallace Beery", Michail Akoumianakis "Mikis", and Grigorios Chnarakis. Mikis was especially welcome as his house was across the road from Kreipe's residence, the Villa Ariadne, in the village of Knossos. The team reconnoitred the area and planned the abduction. Leigh Fermor dressed as a Cretan shepherd, and travelled on the local bus to check Knossos and the area around the German headquarters. From his reconnaissance Leigh Fermor decided that the German headquarters would be too difficult to penetrate. After a few days of alternately observing the comings and going of the General, they finalized the details of the abduction. The plan was for the two British officers, dressed as corporals in the Feldgendarmerie (German military police), to stop the general's car on his way home, at the point of today's memorial, at what was supposed to be a routine check point.

On the night of 26 April 1944, the two British officers stopped the General's car before the Villa Ariadne, at the place of the memorial. When the car stopped, Leigh Fermor and Paterakis took care of Kreipe and Moss knocked the driver out with his cosh, supported by Tyrakis. Moss drove the team (Saviolakis, Tyrakis and Paterakis holding the General on the back seat) in the General's car with Leigh Fermor impersonating the General and Moss, the driver, for an hour and a half through 22 controlled road blocks in Heraklion before leaving Leigh Fermor to go on and abandon the car. When he left the car, he also left documents, revealing that the kidnapping had been done by British Commandos and no reprisals should be taken against the local population. Moss set off with the General and his Cretan escorts across country, to a rendezvous where they would be joined by Leigh Fermor. Hunted by German patrols, the group moved across the mountains to reach the southern side of the island, at Rodakino bay, where a British Motor Launch ML 842 picked them up on 14 May 1944.

Immediately following the abduction and extraction of Kreipe, there was no retaliation by the Germans in the form of reprisals. This contrasted with the almost instant execution of 50 Cretans after the SBS raid in May/June 1942 and the destruction of Viannos by General Muller in September 1943 in reprisal for guerillas’ attacks in the Kato Simi area.

General Bruno Brauer, commander of Fortress Crete and who had replaced Muller, did not to instigate reprisals. No one had been killed and the result of the abduction was a loss of face for the Germans rather than of personnel.

For their part in the successful kidnapping Major Patrick Leigh Fermor was awarded the Distinguished Service Order, and Captain William Stanley Moss the Military Cross. However, the mission wouldn't be successful without the help of the Cretan guerillas, who were never honored.

Published in World War II Monuments
More in this category:
Tweet
back to top