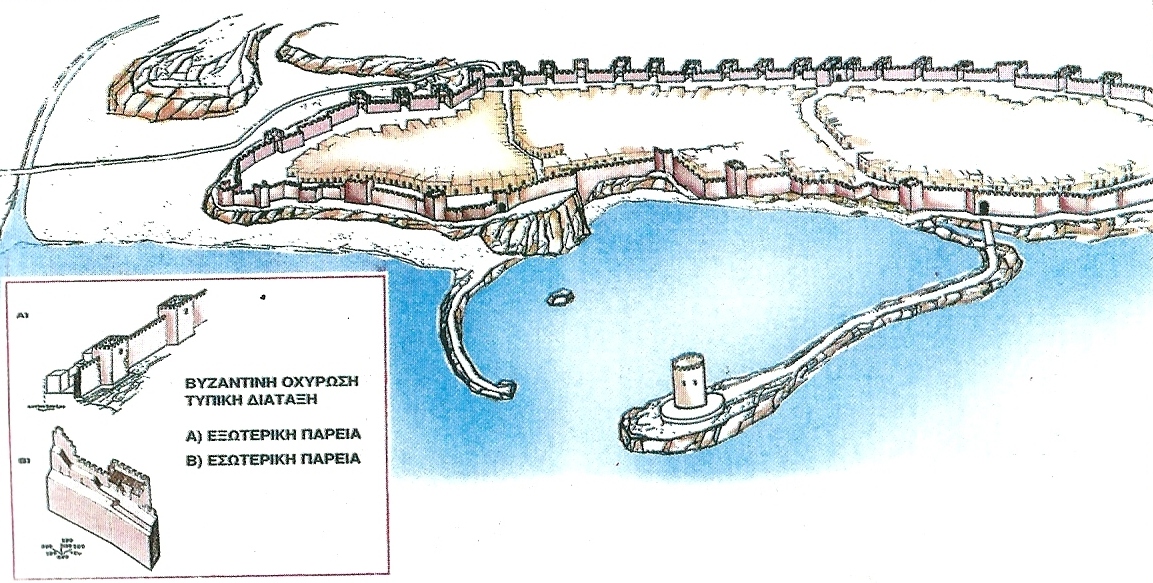 Much later, during the Byzantine period, the settlement still existed and was called Kastro (Castle), due to the fortification wall protecting it. Traces of the Byzantine wall have been found near the port of Heraklion.

In 824AD the Byzantine Castle fell to the hands of Saracen Arabs led by Ambou Hafs Omar or Apochapsis. The capital of Crete, Gortyn, was destroyed by them, as it was not seaside and did not serve the needs of the Saracen pirates. On the other hand, the small castle of Heraklion was ideal for providing a new basis for their predatory raids in the Mediterranean.

After moving the capital of Crete to Heraklion Castle, they built a strong fortification. The Arab fortifications of Heraklion started from the current site of the Archaeological Museum of Heraklion, ran along today’s Daidalou and Handakos Street, ending at the sea. The wall was built of unbaked bricks, made of goat and pig hair. The wall was quite flat so that it could fit two carriages. The outside side of the walls was protected by a deep ditch, which could be filled with seawater in one hour. Because of this trench, the Arabs called the city of Heraklion "Trench Castle » (Rabdh el Khantak), a name that was used for many centuries (Candia).

The Byzantines tried to regain Crete, because of its foremost geostrategic importance and so as to exterminate the pirates who were raping the Greek seas. However, the great fortress of Candia kept them away for many centuries. After several consecutive failing campaigns, Nikiforos Fokas in 961AD managed to free the island. Fearing a possible return of the Arabs, Fokas ruined the fortifications, the ditch, and built the fortress Rokka in Kanli Castelli (today’s Profitis Ilias village).

Chandakas was shortly inhabited by Cretans and the Byzantines rebuilt new strong walls. These walls were built above the Arabic walls, while a gate was built at the point of today’s building Aktarika (next to the Lions square). The name of the gate was later known by the Venetians as Great Arch (Voltone).

After regaining Crete, the Byzantines were closely involved with the defense of the island, by building forts and castles all over the island. At the same time, they installed several soldiers coming from all over the Byzantine Empire to repel pirate attacks.

The Venetian fortification of Heraklion 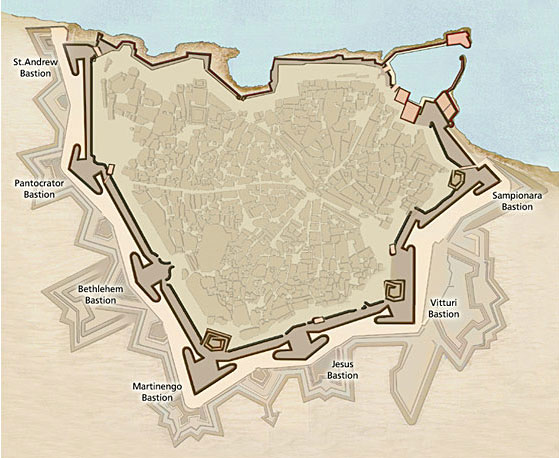 In 1206, after 2.5 centuries of Byzantine presence on the island, the Genoese, led by the Maltese Henry Pescatore and his friend Alamanos da Costa occupied a large part of central Crete. Immediately, they fortified the big three castles of Candia, Sitia and Rethymnon and twelve smaller forts in several positions.

However, in the spring of 1209, the Venetians occupied the fort in Paliokastro (in the Linoperamata area) and on May 1217 they managed to completely get rid of the Genoese. Thus, Crete changed hands for more 4.5 centuries.

The Venetians firstly used the Byzantine walls of Candia. They restored and adapted them to the demands of the martial art of the Era, based on spears, swords, bows, battering rams, rams, rocks, crossbows, and liquid fire. In this revised fortification, they incorporated many parts of the former Byzantine walls.

The Venetian walls had straight sides with towers at distances. It started at the area called (today) Bendenaki, and ran along Handakos and Daedalou Streets, with Voltone gate still standing on its site. Then, the walls ran along today’s Beaufort Street and reached the town port. Outside these walls, radial roads led to the various places of Crete.

During the first centuries of the Venetian rule, the threats for the Venetians were internal, coming from the Cretan people who could not tolerate slavery anymore. After the revolution of the brothers Kallergis (in 1364), which was suppressed in 1367, the Venetian-Cretan relations were significantly improved.

After the fall of Constantinople in 1453, the new raised danger came from the Turkish side. Thus, the Venetians started preparing their defense against the Turks by building dozens of forts on the island. Candia town grew continuously and the settlements were built without planning outside the walls, with the population outside the walls to be 4 times higher than in the castle.

Also, after the discovery of gunpowder and the use of cannons in the 15th century, building a bigger and more powerful Venetian castle, which would protect the entire town of Candia, was necessary. The construction of the new walls (the current walls of Heraklion) began in 1462 and lasted more than a century. The initial projects were designed by the engineer Kampofregozo, but eventually, the plans of the military engineer Michel Sammicheli were used.

The cost of construction funds was covered by Venice, the Kingdom of Crete, the Cretan people, the Church, and the Jews. All Cretan men (14-60 years old) were forced to work for one week, every year, with their animals and without getting paid and fed. The building materials were transported from the quarries of Katsabas, Hersonisos and the ruins of Knossos Minoan Palace.

Around the walls, a deep ditch was formed, which transformed the city into an impregnable fortress. The walls of Candia served the latest fortification art of the time, ensuring the complete protection of the city.

The triangular-shaped wall had its base on the coastal side and had an overall length of 3km. The moat, which was opened around it has very wide and deep. On the outer side of the trench, small forts were built called Revelini, to make it more difficult for enemies to approach the walls.

The walls were protected by seven bastions / ramparts. The bastion was a solid platform, which protruded from the walls, in order to protect a larger area and to support effectively the adjacent parts of the walls. The seven bastions of the walls of Heraklion are the following:

On the eve of the Cretan War (1630), the Venetians had equipped the castle and the fort with 428 cannons of various calibers. Due to the truly excellent fortification of Heraklion, the Venetians renamed Chandakas to Great Castle, a name that still survives.

The Ottomans conquered the Great Castle in 1669, after nearly 23 years of siege (May 29, 1648 - September 18, 1669), after the betrayal of the Venetian Andrea Barozzi, entering from the bastion of San Andreas. The siege of the castle the longest recorded in world history. After the occupation of Crete, the Turks used the defensive constructions of the Venetians to suppress the reactions of the Cretan people. They repaired the walls and fortresses of Heraklion.

At the same time, they changed the names to the Turkish language. Thus, the Martinengo bastion was named Giouksek Tabia, orechione was named Bourtzi, bastion of San Andreas was named Giourous Kapisi, the Gate of Pantokrator was named Geni Kapou, the Gate Dermatas was named Kum Kapi, the Rocca al Mare was named Koules, etc. Therefore, it is very common to hear dual names for the monuments in Heraklion.

The fortification of the Great Castle was neglected in times of peace. However, the fortification walls of Heraklion and the fortress of Koules have been preserved in excellent condition and are the best-preserved Venetian works in Europe.

The Gates of Candia
The castle of Heraklion, Candia, had four main gates in four points: On the north side, at the end of today’s
Read more...