The imposing medieval fortress of Koules still stands at the base of the western breakwater of the modern port of Heraklion. Its initial name is Rocca al Mare, named so by its Venetian founders. Koules, or the Great Koules like it is called, was not the sole ruler of the port. Opposite it, in today's marina pier, a smaller fort (the Small Koules) was standing till the early 20th century, which was demolished to make room for the pier. Moreover, Koules was built on the site of another round tower with battlements.

It is interesting to see how the fort evolved both as a building and as a determinant of history. It is well known that, in the Minoan Era, Crete was not threatened by any external enemy, thus there was no need for fortifying the coastlines. These conditions remained unchanged during the Roman and the First Byzantine periods. However, things changed when pirates firstly appeared in the Mediterranean Sea. Then the need for fortification of cities and ports arose. The Byzantines were the first to fortify several places of Crete, but not to the extent needed, as they were mostly busy with their internal problems. Thus, Crete in 824AD was conquered easily by the Arabs who looted and destroyed the forts.

The Arabs fortified Heraklion, named it Kandax, and made it the base for their pirate raids. After several failed attempts, the Byzantines regained Crete under the commands of Nicephorus Phocas in 961, but after 250 years Heraklion was firstly conquered by the Genoese and, after a few years, by the Venetians. The new rulers built new walls, which were very impressive, and named it Candia or Grand Castle. For increasing the safety of the harbor, they built the famous fortress of Rocca al Mare, i.e. the Fort of the Sea. This was originally a small tower, as we mentioned earlier.

But soon the Venetians realized that the fortification of the port with one tower was insufficient, especially after the discovery of gunpowder and the invention of cannons. Besides that, the small tower was already severely damaged by the earthquake of 1303 and was not repaired properly. Thus, they decided to build a new larger fort, which would meet their needs. The decision for demolishing the old fort was taken in 1523 by the relevant council, which consisted of Duke Mark Minios, Captain Thomas Motsenigo, engineer Sarakinis and the commander of Infantry, Dacomo. The decision was immediately adopted by the Venice and the demolition of the old fort started in the same year.

The construction was completed in 1540 and the exorbitant cost was covered by the funds of Venice and Candia. The construction conditions were hard, as the works were interrupted during the winter, due to storms and low temperatures. Also, the basements and the platforms were built using boulders from the Minoan harbor, from the island of Dia and the bay of Fraskia. To construct the protective sea walls, old ships were loaded with stones and were sunk in place.

When the construction finished, an architectural masterpiece emerged. This modern fortification project, in collaboration with the fortress Paliokastro, ensured the safety of the entire Gulf of Heraklion. The fort consists of two floors. The ground floor was divided into 26 apartments for various uses (food stores, ammunition depots, rainwater tanks, and prisons). All apartments were lit by large skylights, called sospirali lucernai, starting from the vaulted roof. The fort was also equipped with a bakery, mill and a small church. 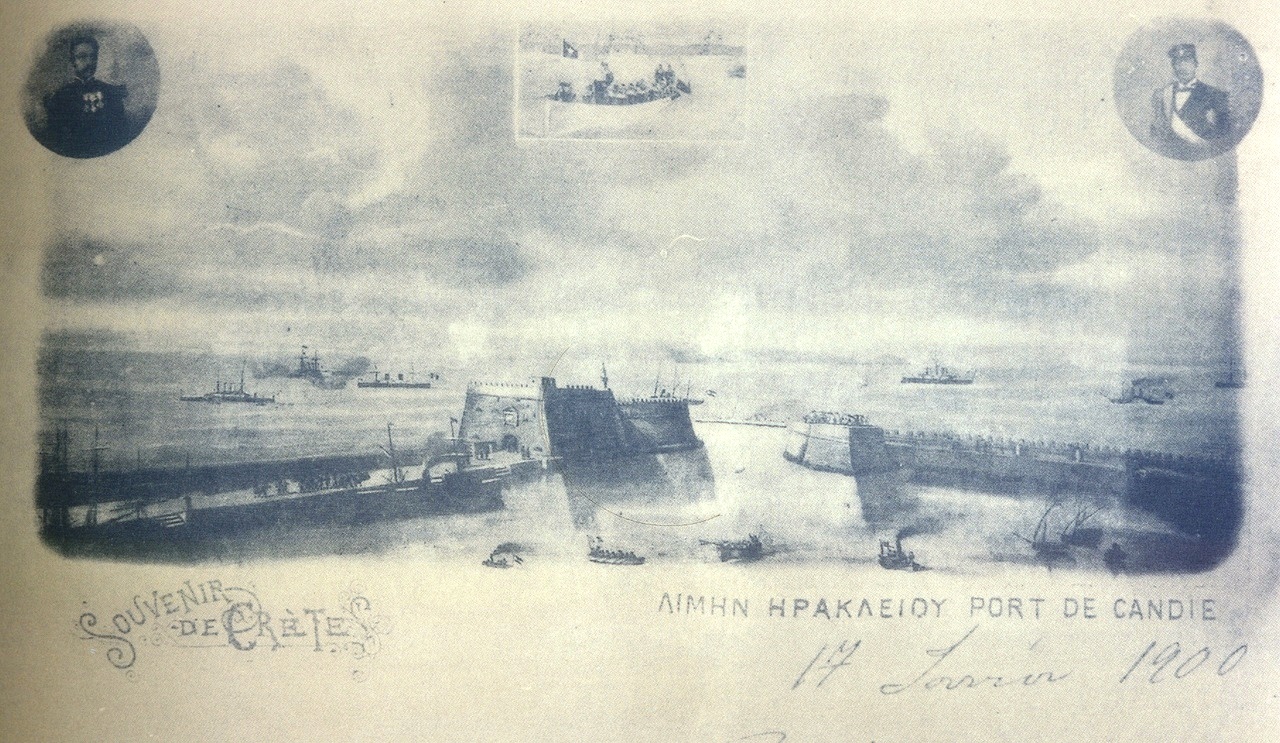 The first floor hosted the quartering areas of the garrison, while at the northern corner there was the lighthouse. The three walls of the building (south, north and east) were equipped with three white marbles with the emblem of the Most Serene Republic of Venice (the winged lions). The lions still exist today, but have been eroded by time and sea. The historian Basilicata indicated that the floor was equipped with 18 cannons, the ramparts with 25, and there were 300 boxes of gunpowder and 6144 cannonballs of various sizes.

The fort was intended to protect the harbor, which was the central naval dockyard of the Venetians and the main cargo terminal of Crete. On the site where today you’ll see the headquarters of the Region of Crete, there were the shipyards, part of which survives today. Despite the great art and care with which it was built, the fort suffered several problems and needed constant repairs. These were mainly caused by the erosion of the northern wall. After 1669, when Candia fell to the Turks, the new conquers continued to repair Koules fort, as they renamed it (kule means tower). Inside Koules, they built some ramparts and watchtowers. In 1719, a part of the northwest side collapsed due to a fierce storm but was immediately repaired.

In the prison of Koules, many Cretan rebels were imprisoned. Indeed, the Turks imprisoned 70 Sfakian rebels who took part in the revolution of Daskalogiannis in 1770, but they escaped with the help of the crypto-Christian Michael Kourmoulis.

Today, Koules is open to the visitors and is frequently used for cultural events. It hosts a permanent exhibition of the findings from the surveys of the legendary oceanographer Jacques-Yves Cousteau in the 1970s, with the most important being those of vessel La Therese of the French Fleet, sunk on July 24, 1669, during the last act of the Cretan War.

Saint Demetrius of the Carpenters

The Venetian Loggia of Candia