The archaeological site of Gortyn (or Gortys) is located 45km south of Heraklion, near the village Agii Deka and next to the road connecting Agii Deka with Mires. The city covered a large area on the sides of the river Mitropolianos (or Litheos), even today surrounded by the ancient olive grove of Gortyn.

The area was inhabited since 3000BC, while during the Minoan era it evolved as one of the largest cities of Crete. Indeed, in the 3rd century BC it surpassed Phaestus and managed to possess the harbor of Matala, while retaining its port in Levina (current Lentas) and Lassea (current Chrysostomos). The town reached its peak during the Roman Empire, when the Romans moved the capital of Crete and Cyrenaica (today’s Libya) in Gortyn. The city was finally destroyed by the Arabs in 828AD, after arounr 10 centuries of prosperity.

The city of Gortyn is one of the most important archaeological sites in Greece. The first archaeological works started in 1884 by the archaeologists Federico Halbherr and Stefanos Xanthoudides, after they discovered the Great Inscription of Gortyn. In 1898 the first excavations started, which continue till today.

In Gortyn you could visit the following attractions: 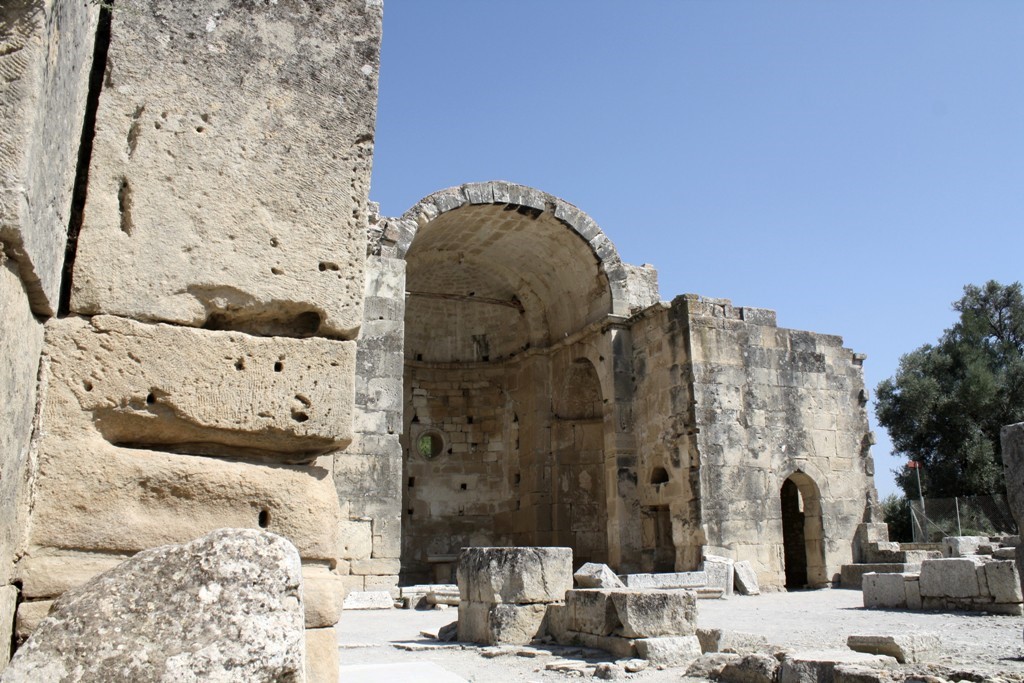 The temple of Saint Titus

The temple of Saint Titus

Inside the main archaeological site (near the road) still stands a small part of the imposing basilica dedicated to the first bishop of Crete, Saint Titus. The temple was built in the 6th-7th century and was dedicated to Saint Titus after the destruction of the larger basilica of Saint Titus located nearby. The small part that has survived is currently used for the worship of Panagia (Virgin Mary). Around the church, several stone sarcophagi have been identified, used for burying the priests. 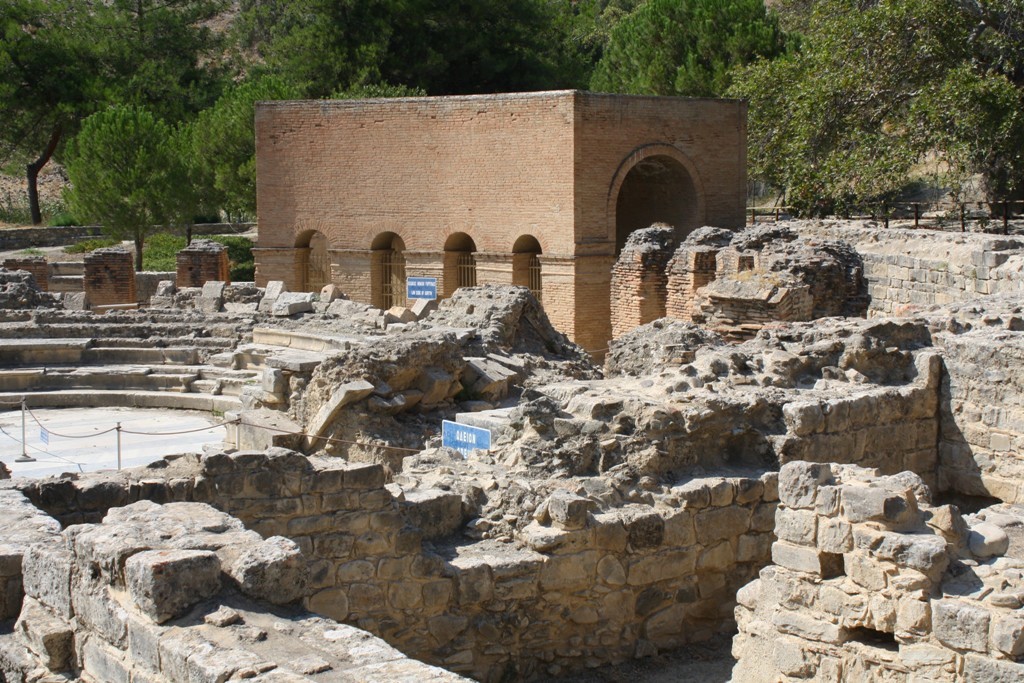 The Roman Odeon is the largest Odeon in ancient Crete, which is actually an indoor Roman theater. It was a very important part of the ancient city, where the Romans watched performances and talks. The auditorium has been maintained in quite good condition, as well as the semicircular orchestra and the stage which was decorated with statues. Next to the theater, there was the Agora and temple of Asclepius. 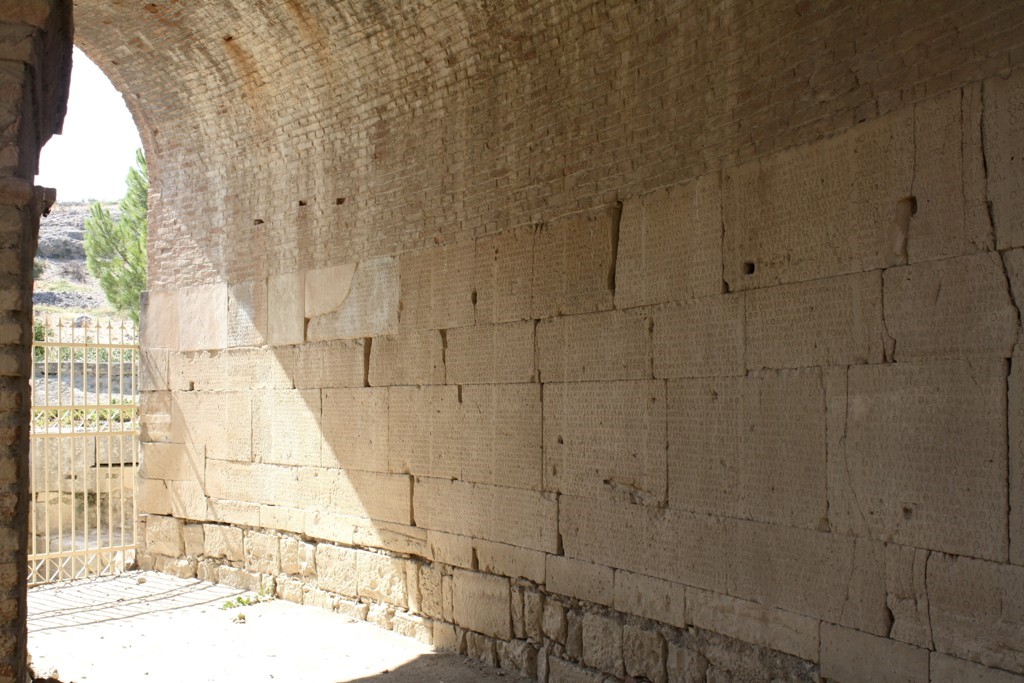 The Law of Gortyn

The Great Inscription of Gortyn

Next to the small theater, Halbherr discovered in 1884 four stone columns in the Doric dialect, where the civil law of Gortyn was engraved in boustrophedon script (bi-directional / alternation writing direction per line). Later, parts of the rest eight columns were found, some of them embedded on walls of houses in the village Agii Deka(!), thus completing the puzzle of the Law of Gortyn. The twelve columns (deltas) of Gortyn had about 640 verses, 605 of which have been found. The very progressive laws refer to 450BC and were inspired by Minoan elements. The Law of Gortyna is the oldest surviving law in ancient Greece. The exhibition of the statues

Near the parking place, a small room houses the Roman sculptures found in Gortyn. One of the most important statues probably depicts the emperor Antoninus Pius. The plane tree of Gortyn

The plane tree of Gortys

At the back side of the archaeological site, you will find a tall plane tree, which has something very rare. It is evergreen, unlike other deciduous plane trees, and has been the center of a fabulous myth. According to the Greek Mythology, this is the perennial plane tree of Gortyn under which Zeus and Europe mated mated. From this union, the three kings of Crete were born (Minos, Rhadamanthys and Sarpedon). Indeed, it is no coincidence that at Gortyn, several coins were found depicting Europe and Minos (or Zeus). Moreover, the name of Gortyn is believed to be related to Gortyn, the son of Radamanthys. 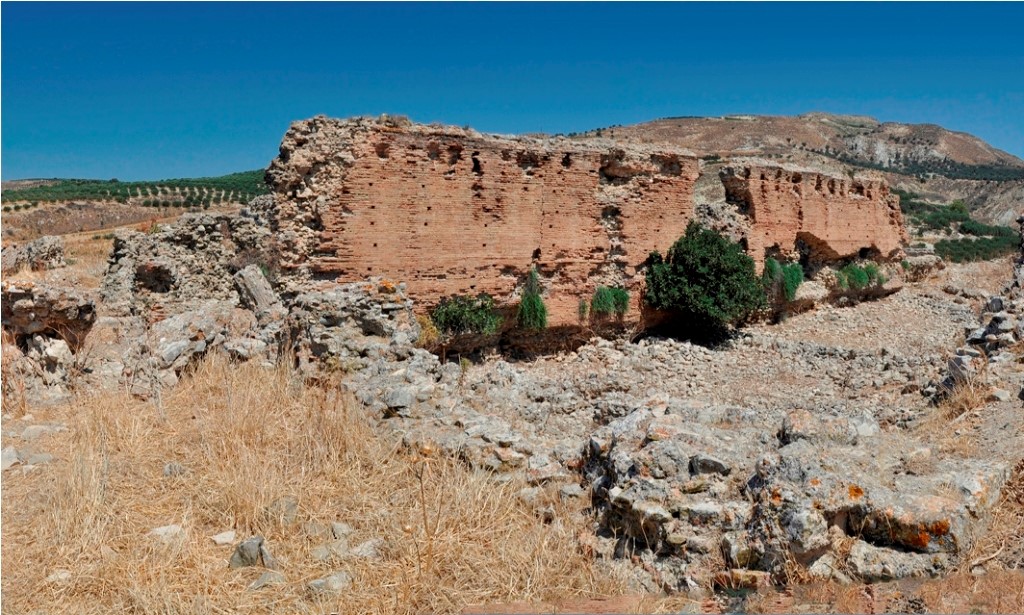 The acropolis of Gortyn

Within walking distance from the city (northwest) and atop a hill, you can visit the ruins of the acropolis of Gortyn. The hill was inhabited till 6000BC, but after the Dorian invasion (1100BC) it was fortified with a polygonal wall with towers at its corners. On the Acropolis, the archaeologists have identified the ruins of a Byzantine basilica (6th century AD) built on the site of an older Greek temple dedicated to Athena (7th century BC). Within walking distance from the main archaeological site of Gortyn and south from the main road, there is the Praetorium (1st century AD). The Praetorium was a large, luxurious and imposing building used as the headquarters of the Roman Province of Crete and Cyrenaica. It is still interesting to see the elaborate luxury marble floors, columns and statues. In the complex there were Roman baths, courtyard with columns, temple for the deified Augustus, courts and other public buildings. During the Byzantine period, the building housed a monastery. 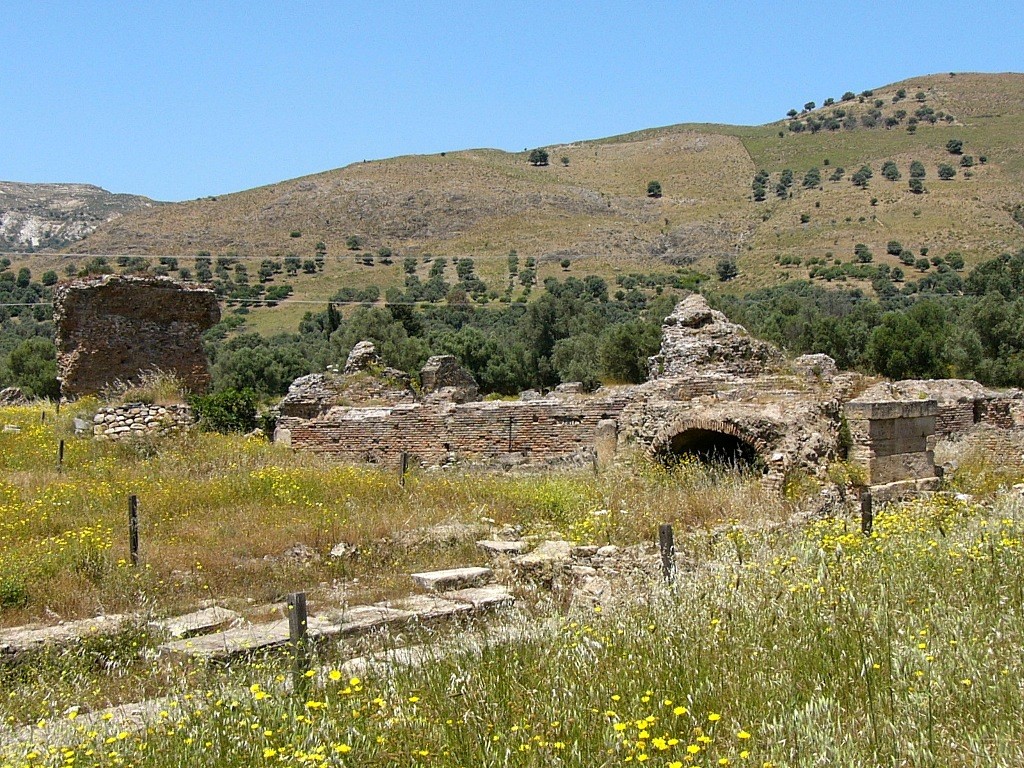 The thermae (baths) of Gortyn

The Romans, as in every place they went, they built their favorite spas. As expected, in Gortyn they built a large complex of spas (thermae) with several auxiliary rooms and toilets. Like most Roman baths, in Gortyn there were warm baths, baths of intermediate temperature and cold baths. The ruins of the spas in Gortyn have not been fully excavated, but still the visitor can get a good feel for the area (near Praetorium). The large temple of Saint Titus

The Great Basilica of St Titus

The ruins of the Great Basilica of Gortyn is located 200m south of the main archaeological site, on the way to Mitropoli village. The five-aisled temple, discovered accidentally in 1978, was the largest church in Crete. The temple was dedicated to Saint Titus, but after its destruction by an earthquake (670AD), it was moved to the temple inside the current archaeological site. 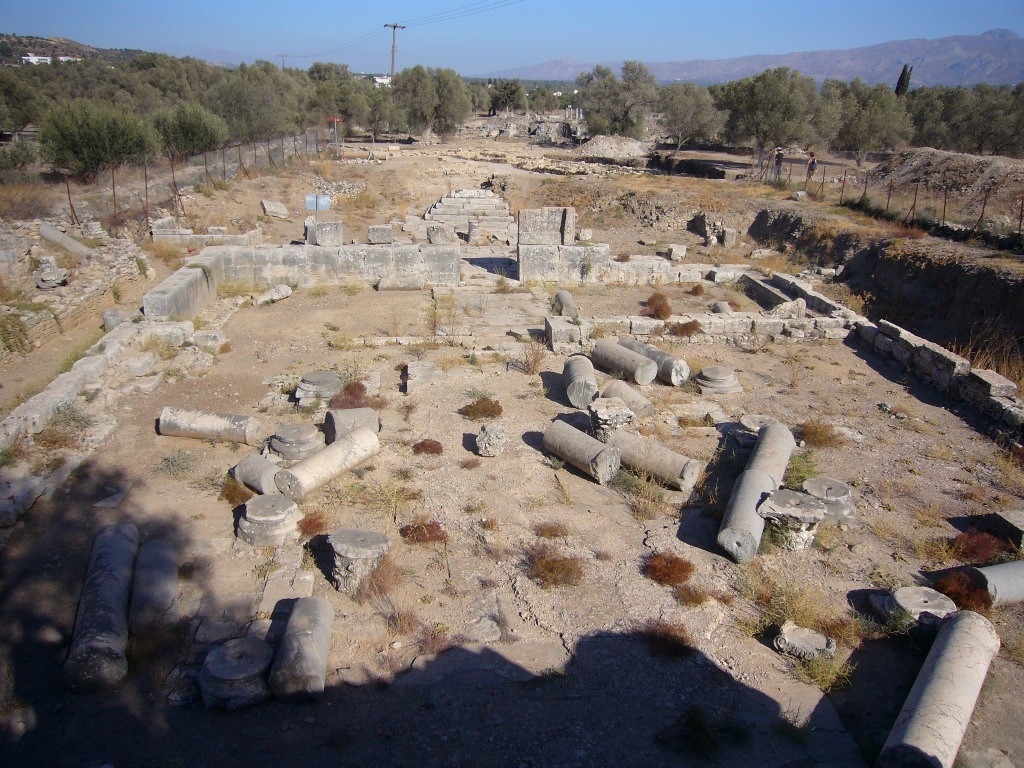 The temple of Pythian Apollo

The Temple of Apollo

Few meters north of the Great Basilica, you can follow the path that leads to the Praetorium and will soon meet the sanctuary of the Pythian Apollo (7th century BC), discovered in 1887. The temple was the largest temple of Gortyn before the advent of Christianity in Crete (and the building of the church of Saint Titus). Next to the church there was a small theater, an aqueduct and some houses. The temple of Egyptian Gods

The Temple of the Egyptian Gods

Near the Temple of Apollo, you will also see the temple of Isis, Sarapis and Hermanubis. This temple is the only temple in ancient Crete dedicated to Egyptian deities. The temple was equipped with an underground crypt and a cistern.

Church of Saint Charalambos in Paliama