Phaestus (Phestos, Festos, Φαιστός) was a Minoan city on Crete, the ruins of which are located 55km south of Heraklion near Tymbaki. The palace of Phaestus was built on a low of the plain of Messara, with panoramic views to the surrounding area. It is the second largest Minoan palace after Knossos and occupies an area of ​​1.8 hectares.

The city was already inhabited since 6000BC and prospered concurrently with the city of Knossos, till the 1st century BC. Phaestus is famous for the Minoan palace, which is a visitable archaeological site and receives thousands of visitors every year. It was built in about 2000BC, according to the legend, by Minos, the king of Knossos. The palace’s king was the brother of Minos, the mythical Rhadamanthys, who was the econd son of Zeus and Europe and was known for his faireness. Indeed, he is considered the writer of the Cretan Code, the first standards of Justice, which was later adopted by the Spartans. Due to his fairness, after his death, he was assigned as a judge in Hades (like his brother Minos).

The palace was destroyed in about 1700BC by an earthquake, but was restored immediately. Then Phaestus declined and the neighboring settlement of Agia Triada flourished, the archaeological site of which you can visit today. Phaestus remained the most important religious center of southern Crete. After the destruction of 1450 BC (possibly due to an earthquake), Phaestus recovered and minted its own currency. This new bloom lasted till the first century BC, when it was destroyed by the neighboring Gortyn, which in the Roman Times became the new capital of Crete.

The buildings a visitor sees today in Phaestus date back in 1700-4150BC and, unlike Knossos, have not been restored with cement. The excavations started in 1900 by the Italian Archaeological School under the guidance of Federico Halbherr and Luigi Pernier, while in 1950-71 they were carried out by Doro Levi. 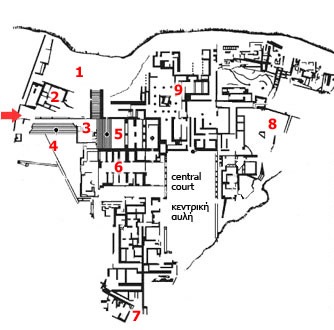 The entrance to the palace starts from the paved north-western court (1). From there, a staircase leads to the west terrace (4) with the small theater and the tripartite sanctuary (3). Another grand staircase leads to the central courtyard and the western storehouses (6). On the opposite side, you will see the ruins of the altar and the entrance to the royal rooms. On the south side of the court lies the Neolithic kiln and the Temple of Rhea (7). To the east (8) lies the palace of the Prince and beyond that you will meet the mining furnace. The north palace housed an isolated building, called Archive (9), where the famous Phaestus Disc was found. The disc is made of clay and both its sides are engraved with 241 symbols in a spiral direction that has not yet been read by the archaeologists. Next to the Archive, you will see the apartments of the Queen and the King (9), and the reservoir basin.