Spinalonga is a small island located at the entrance of Elounda lagoon and north of the Gulf of Mirabello. It has an area of 85 acres and its maximum height is 53 meters.

The history of the island still inspires awe. It has been a Venetian fortress, a castle colony, a rebel refuge, a place of exile for lepers, a communication link with Cairo during the Second World War. The island has been well fortified by the Venetians during their presence in Crete. From structural and architectural point of view and from an aesthetic view of the whole landscape, the island still retains an unsurpassed beauty.

Its original name was Calydon, but the Venetians named it Spinalonga from the Venetian word Spina-Longa, which means long thorn. According to a second weaker interpretation, Spinalonga derives its name by paraphrasing "Stin Elounda”, meaning “In Elounda”. Another, version tells that the island got its name from a beautiful woman named Longa that was living in the fort. 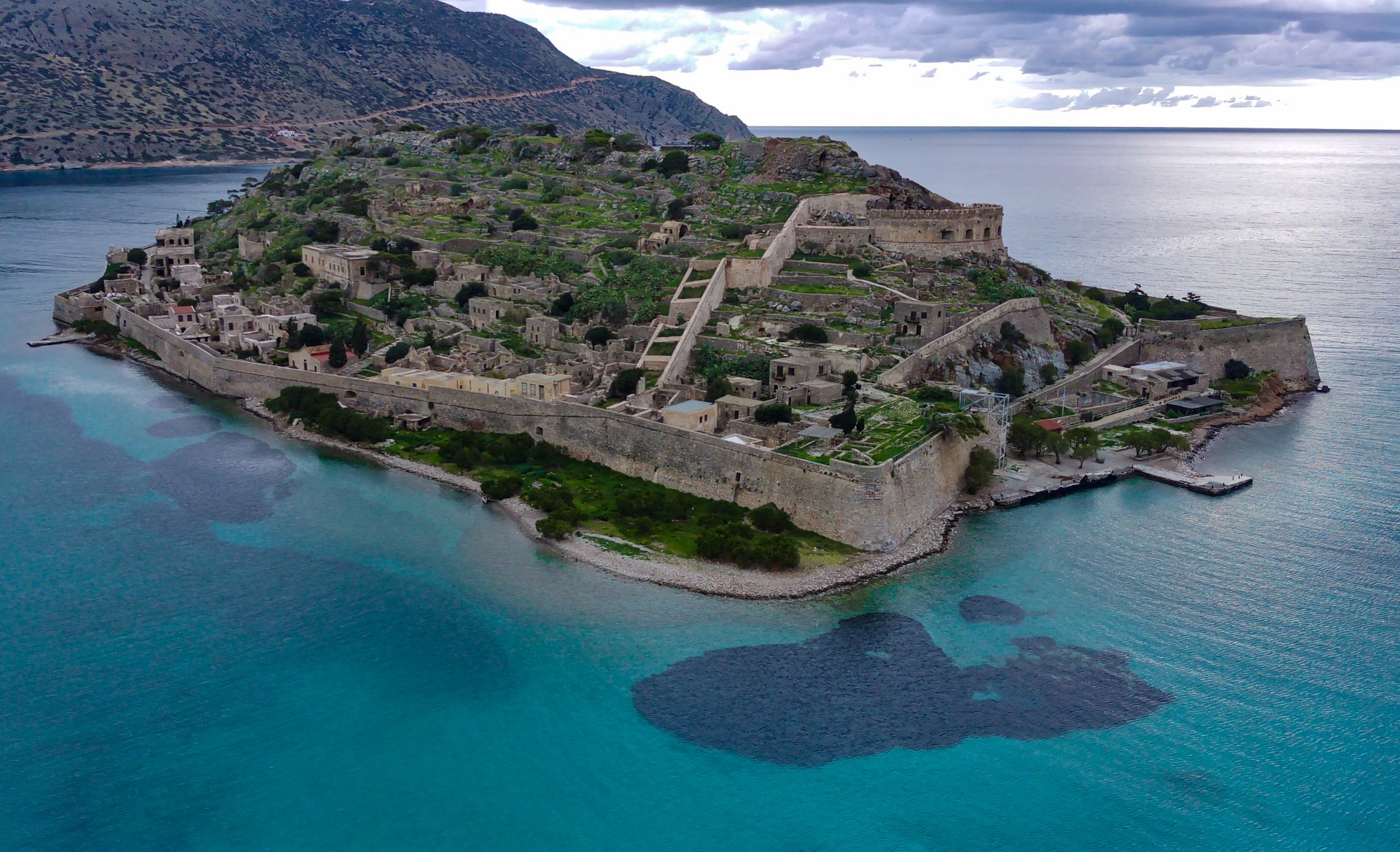 During the Hellenistic period or the Minoan years, the island was a stronghold of Olounites, which was built to protect the port of the ancient city Olous. Olous was the ancient town of Elounda, currently immersed under the strip of land that connects Elounda with the Peninsula of Kolokytha. Olounda had an important harbor and sanctuary.

Spinalonga belonged to Olounda, which flourished until the 8th century when the threat of Arab pirates forced residents to move away from the beach. From the 8th century till the Venetian Period, the city does not appear to have had any significant evolution.

The building of the Spinalonga fort started in 1574, when the Turks invaded Cyprus. Venetians predicted that Turks would start expanding to the West Mediterranean and decided to build a fort on the island, protecting the whole lagoon of Elounda. By this, By building this fort, Venetians would keep pirate and Turkish ships away from the Gulf of Elounda and would ensure the salterns of Elounda. The salterns of Elounda were of foremost importance for Venetians, who wanted to continue trading salt in East and West Europe, especially after having lost the salterns of Cyprus.

Thus, the Venetians built a new powerful fortress above the ruins of the ancient fortress of Olounites, which was designed in accordance with the bastion fortification system, by Genese Bressani and Latino Orsini. The first phase of construction lasted from 1579 until 1586. Repairs and alterations to the fort were made before and during the Cretan War (1645-1669). The temples of St. Panteleimon and St. George were built during that period. The fort had a double line of walls and towers and had a total of 35 cannons. 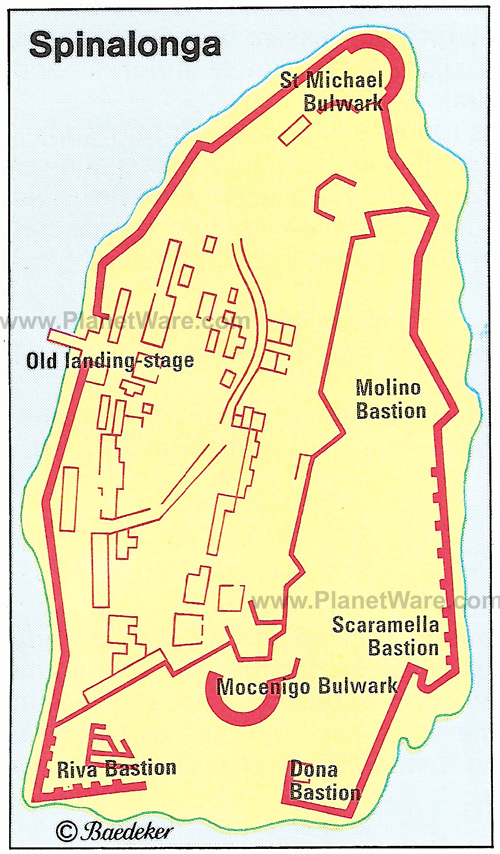 Site MapDuring the Cretan War (1645-1669) refugees and rebels (Chainides) used the island as a refuge and a base for bothering Turks. Their presence lasted as long as the Venetians held the fort. After the Fall of Candia in 1669, Spinalonga remained under the control of Venice. The Venetians tried to keep the strategic fort, with the fortresses of Imeri Gramvousa and Souda, hoping to get back the island of Crete in future.

However, in 1715, the Turks came to terms with the Venetians and occupied the island. During the first years of Ottoman occupation, the fortress was marginalized and used as a place of exile and isolation. Later, a purely Ottoman settlement gradually formed in Spinalonga, since the island provided absolute security for families. In the late 19th century, the role of the port of Spinalonga was upgraded, since it obtained a license for export trade. In the mid-19th century the island gathered a large number of residents, mostly merchants and sailors, who took advantage of the license. It is estimated that in 1834, 80 families lived in the castle of Spinalonga, while in 1881 this number rose to 227. Even today there are buildings from the period of the castle town, as two-storey houses with tall yard walls and shops with wide doors and large windows.

The life of this settlement stopped abruptly because of the political changes that took place in Crete during the last years of the 19th century. In 1897, French military forces were installed on the island for about one year.

The uncertainty that prevailed among the Ottomans in Crete, because of the revolutionary actions of Christians, forced most residents of Spinalonga to migrate. Until 1903, all Turks abandoned the island. 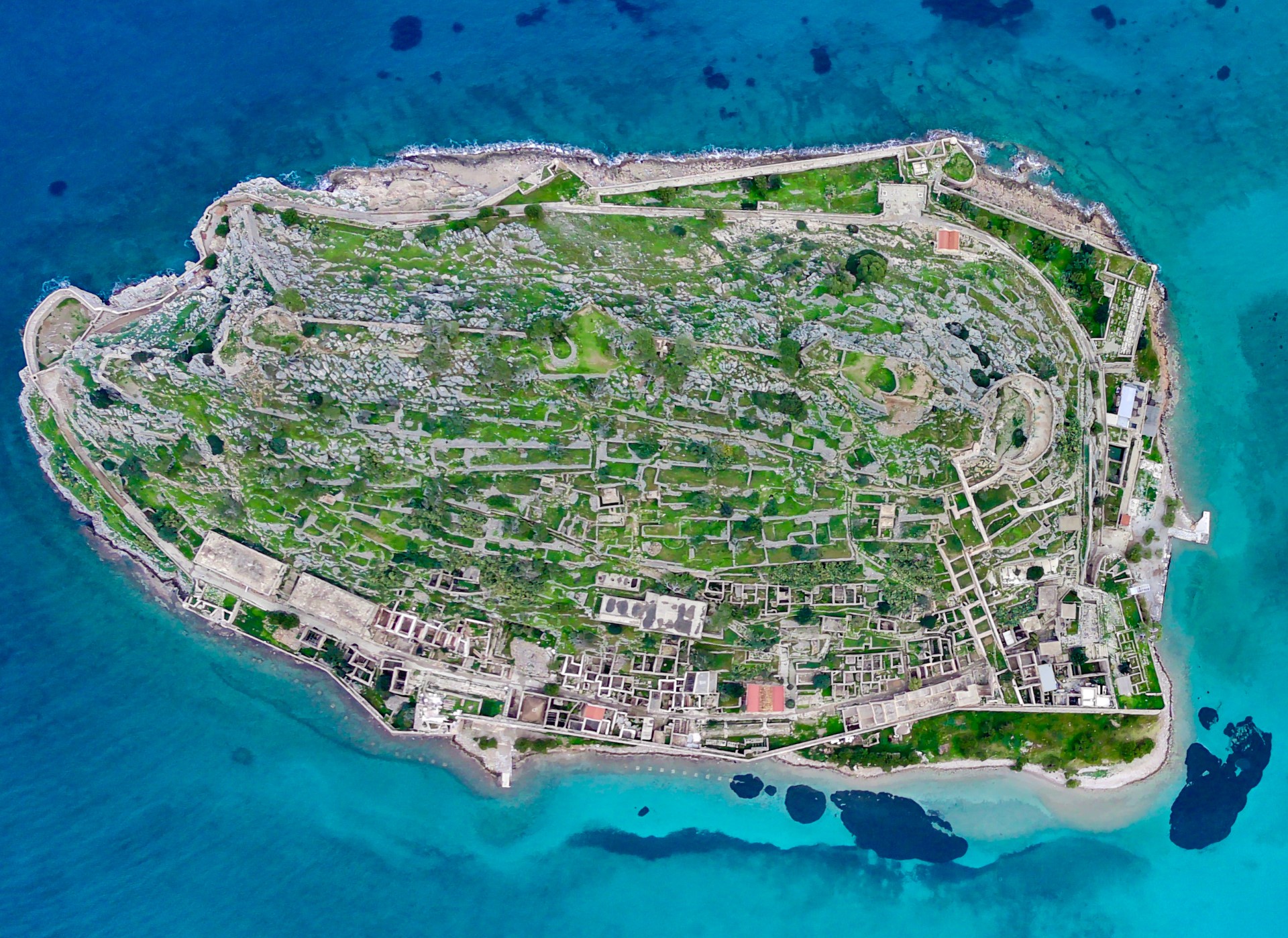 In 1903, the Cretan State gathered all lepers who lived in settlements near the major cities of Crete, called Meskinia, and moved them to Spinalonga. Thus, the island became a leper colony for the Cretan patients of Hansen's disease, known as leprosy. Initially, lepers were brought from Crete and, later, from all over Greece.

A story full of pain, screams and death would conquer the island for half a century. Initially the lives of lepers were miserable. Spinalonga was a vast slum, a cemetery for lepers, without any organization, without medication for the sicks, without hope.

Later, Leper Hospital upgraded. It had a director, a doctor, nurses, caretakers, cleaners, financial service and priest. The lepers resided in the Turkish community houses and in modern buildings constructed in the 30s. Large parts of the Venetian walls were destroyed in 1939, with dynamite, in order to open up the perimeter road that currently exists on the islet. After the establishment of the leper colony, residents from the opposite coast, built the present village of Plaka, just opposite Spinalonga, so as to serve the leper colony.

During the Italian-German occupation, the occupiers did not dare to release the lepers, and were forced to take care of them, since the opposite village of Plaka was evacuated. Also, the whole coastal area of Elounda had been fortified with machine guns, underground mines, firearms, etc, since German feared a possible invasion of the British in that area. None Italian or German dared to enter the colony. This fact helped lepers to operate illegal radio, while the doctor Grammatikakis copied the news from London and Cairo and shared this to residents.

Finally, in 1957, with the discovery of antibiotics and after all lepers were cured, the leper colony closed and the island was deserted. The last inhabitant, a priest, left the island in 1962. This was to maintain the religious tradition of the Greek Orthodox Church, in which buried persons have to be commemorated 40 days, 6 months, 1, 3 and 5 years after their death.

After 1957 and for several decades, the island remained abandoned. With the raised interest of many tourists, the local authorities started in 70s to systematically repair and renovate old buildings, fortifications of the Venetian walls, old houses and roads, and tore the buildings of the hospital down. Since then, works for improving the condition of buildings on Spinalonga, have never stopped.

Today the castle and the castle of Spinalonga is preserved, in its most part, in good condition and the island is considered one of most important remaining strongholds in the Mediterranean sea.

Over 300,000 visitors each year visit this charming island by boat, starting from Agios Nikolaos, Elounda and Plaka, which is just 800 meters away. This number brings the island in the first five Byzantine / post-Byzantine archaeological sites in Greece.

In 2005, the author Victoria Hislop wrote a gripping novel about Spinalonga, titled "The Island", which won the British Book Award of Newcomer of the Year 2007. The book has dominated for 24 weeks in the British top 10 and has been translated into over 15 languages, making Spinalonga and its history known throughout the world.

Every year, people of all ages go by boat to the island for the holy pilgrimage to Saint Panteleimon and to commemorate their relatives who died on the island. There, the visitor can hear incredible stories from people who lived or had relatives on the island.

A very characteristic testimony is that of Mr Manolis Foundoulakis, reported in the greek newspaper "To Ethnos " in 2007, who lived the nightmare of the island, but also the redemption of treatment. He was living in Athens and was treated in the Leper Hospital of Aghia Varvara. Being the general secretary of the Hansen Association, he went to Spinalonga. There, he experienced the tragic reality and was interested in upgrading the conditions of residence and treatment of the unfortunate people of Spinalonga.

The stones and the rocks in the empty houses hide and do not show the horrors of yesterday, the laments and the cries because of the pains in the body of hundreds patients

Spinalonga hosted hundreds of sufferers, who developed, with the suffering and deprivation, their own vibrant society. Those who could, worked on various posts. There was a coffee shop, they were attending the church of St. Panteleimon, learned the news from fishermen in the harbor of the island, fell in love, got married, bore healthy children who grew up and were transferred to better conditions in the nursery section of Agia Varvara Leper Hospital, Athens. Until 1936, the patients on the island were totally neglected. Many died 'alive' in terrible pain, deformed and fragmented.

This situation began altering after 1936, the year when the patient Epaminondas Remoundakis, a third year law student, arrived in Spinalonga and who founded the "Fraternity of Spinalonga Patients” and struggled over the following years for improving the living conditions of patients. Remoundakis, after the closure of Spinalonga in 1957, was admitted to the Leper Hospital of Agia Varvara.

We were together. He was a great man and the terrible disease had sentenced him to blindness and his hand was cut... I will never forget, as long as I live, the words he dictated and I wrote: "When walking the path of Spinalonga, stop and hold your breath. From a hovel around, you will hear a dirge from a mother or a sister, or a man sigh. Leave two tears from your eyes and you will see million tears having watered that road twinkling.

Published in Islets
More in this category:
Tweet
back to top