Lake Kournas is the largest natural lake in Crete and is located in an enchanting landscape, between the west slopes of the White Mountains and the fertile plane of Georgioupolis. It is located near the village Kournas, 2.5km south of the beach of Georgioupolis, 43km east of Chania and 20km west of Rethymnon. Lake Kournas and its surroundings constitute a very important ecosystem for Greece, as the wider area of Apokoronas is one of the very few areas of Crete where plenty of fresh water is stored throughout the year.

The name Kournas is believed to come from the Arabic word kurna for "lake" or "bath". In ancient manuscripts it is mentioned as Korissia, while it is believed that the area hosted a sanctuary dedicated to Korissia Athena. 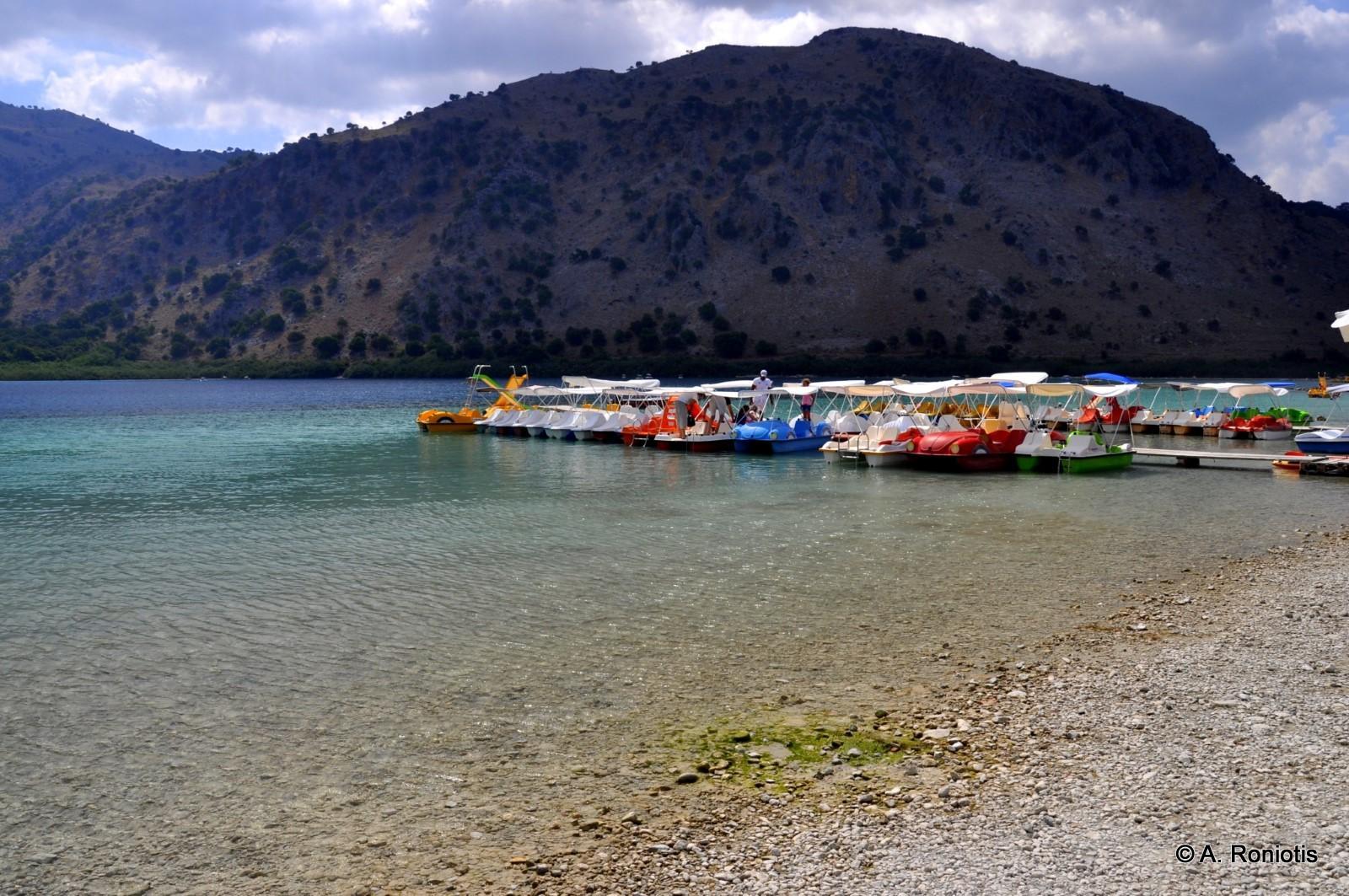 Pedal boats in Lake Kourna
The lake is created by the accumulation of groundwater coming from the White Mountains. The water gushes from a spring called Amati or Mati (meaning “eye”), which is over the lake surface in the summer months, while it’s hidden below the surface during winter. There is a second spring, which is always underneath the surface. Essentially, Kournas Lake is a large pit that is fed from its southeastern side by water due to the porous grounds, while from the opposite site it is waterproofed due to the nature of the rocks.

The lake is small and circular and covers an area of 57.9 hectares, has maximum depth 22.5 m, maximum length 1080m and maximum width of 880m. The volume of water in summer is approximately 7.5 million cubic meters. The water is transported to the beach of Kavros via the river Delfinas. In some parts of the lake, overflow and drainage works can be seen, that are used for diverting water to the farmland. 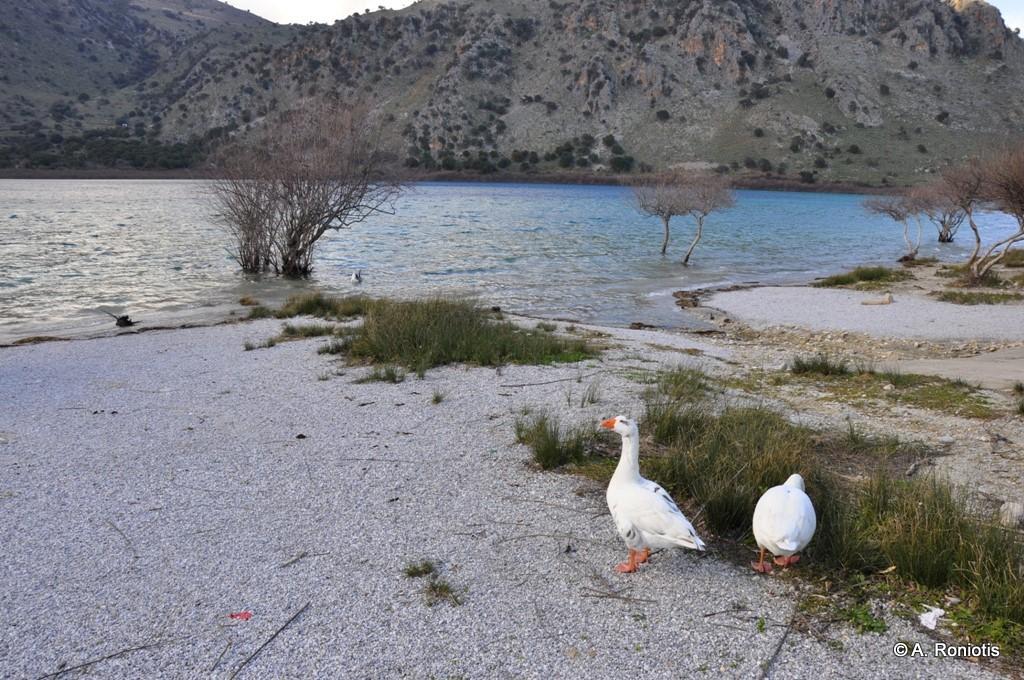 Hens in Lake KournasThe ecological value of the area has included  the lake into the Natura 2000 protection network of protected areas. However, the surroundings have been degraded by human intervention, such as the construction of restaurants and other lakeside stores. The lake is set amidst an environment with rare aquatic plants and trees. The dark color of the lake is due to the algae at its bottom.

Many species of aquatic birds such as moorhens, ducks, herons and cormorants are found here. Also, Lake Kournas has always been well known for its eels, which still exist in significant populations. The wetland also hosts water snakes and terraoins. Unfortunately, introduced populations of goldfish have raised in recent years and their growing population has significantly disrupted this closed ecosystem.

Lake Kournas is a favorite destination for visitors of Crete and locals. It is an ideal place for relaxation and a walk. In summer, a stroll around the turquoise lake lasts less than an hour (3.5 km). On one side of the lake there are cafes and restaurants overlooking the lake, however they have spoilt the scenery. Adjacent to the cafes, small sandy beaches are formed during the summer, as the water surface reached lower levels.

Moreover, visitors could either pedal or kayak in the lake. This is an ideal choice for the afternoon, when the color of the water is beautiful and the lake is very calm. During winter and spring the water level is higher and walking around the lake is difficult because the vegetation is dense the bank. The beaches are disappearing and water overwhelms even the stairs located next to the restaurants.

Some legends about Kournas

The lake has dark water and inspires awe to everyone who visits it. Thus, in the past, locals believed that the lake is bottomless. However, measurements have proven that the maximum depth of it has been estimated at 22.5m.

A second myth states that there was a village in the position of the lake, where a beautiful girl lived with her father. One day, while they were walking to the fields, they stopped to rest for a while. The young daughter began to comb her hair and her father admired her. However, this admiration turned to erotic love and her father tried to seduce his own daughter. The desperate girl starting shouting "Lake come and I will be the ghost of the lake". The area immediately sank and flooded with water, creating the lake. The locals say that many visitors have seen a fairy combing her hair in the moonlight, sitting on a rock in the middle of the lake. They say that the fairy protects the animals and the ducks of the lake.

Another version of the myth tells that the God got angry about the sinful behavior of locals and caused a flooding to punish them. The residents were all drowned, except the daughter of the priest, which is the fairy that has been seen by locals.

Finally, some believe that paranormal phenomena are caused by electromagnetic fields of the lake that either cause inconvenience or a positive mood.

Church of Saint Nicholas at Maza

Church of Saint George at Habatha

The Dragon of Saint Anthony at Kalamitsi