Kastelli Kissamou, which in 1966 was renamed to Kissamos, is a small picturesque town built in the gulf of Kissamos or Myrtilos, between the peninsulas of Gramvousa and Spatha. The name derives from the Venetian fortress Castel Chissamo that was built there, remains of which still exist.

The first fort of Kastelli was built by the Genoese pirate Enrico Pescatore on the site of the ancient Kissamos, in the early 13th century, and was one of the 15 forts fortified by the Genoeses after 1204 AD. When the Venetians expelled Pescatore, the fortress fell into their possession. Then, they restored it and it became the defensive military center of the region.

The shape of the fort was asymmetrical pentagon and, like all the Venetian fortresses, it included quartering areas, prisons, churches and a well. Since the early revolutions of the locals, the fortress of Kastelli Kissamou became a target of the rebels. When in 1262 the Cretans, with the help of the Byzantine emperor Michael VIII Palaeologus, rebelled against the Venetians, they tried to occupy the castle, but failed. 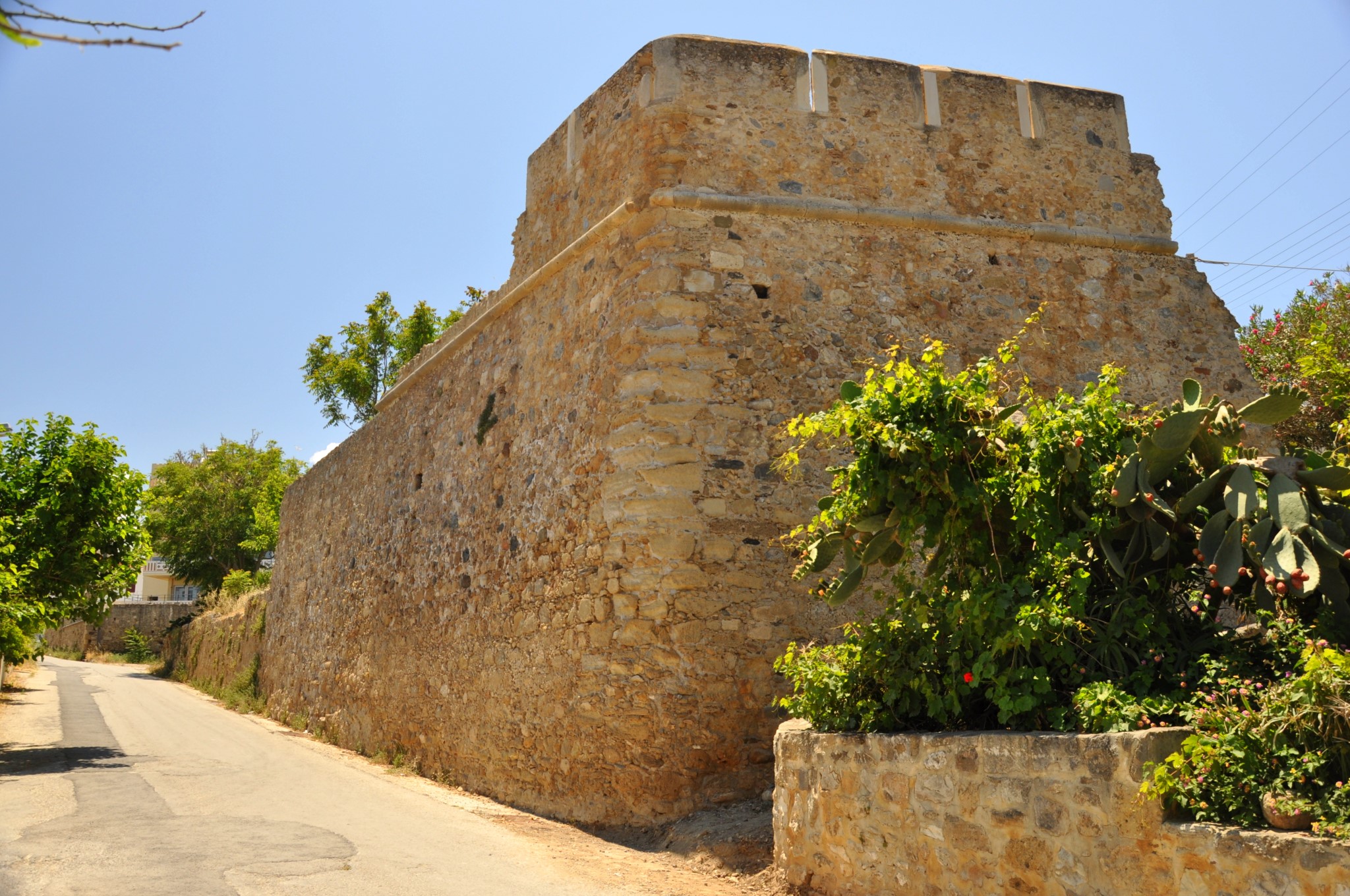 Remaining Part of Kissamos FortDuring the revolutions of 1333 and 1341, the Venetians destroyed the settlement (bourg) that had developed around the fort, but later decided to rebuild it. From then on, the settlement was named Kastelli, like all bourgs on the island.

In 1646 the Turks besieged the fort, which fell after the betrayal of the commander Giovani Medici, who gave up because the fortress had been severely damaged and most of his soldiers died of plague. The Turks repaired the fort immediately and started using it.

In 1692, during the first Cretan revolution under the commands of the Venetian admiral Mochenigo Aloisio, the rebels occupied the fortress, but it lasted for a while.

Thus, during the Ottoman occupation of Crete, the fortress was the center of many revolutionary activities. In 1821, the fort was used for imprisoning the Bishop of Kissamos Melchizedek Despotakis. From there, the Turkish mob dragged him to a square, for hanging him. When the revolution was generalized, the 1800 Turks of Kissamos found refuge in the fortress, which was besieged by rebels and two ships coming from Hydra island (near Athens).

In February 1823, during the preparation for the landing of the new General Head of the Cretan Revolt, Emmanuel Tombazis, the rebels organized the clearing of Kissamos and Selino provinces, forcing the Turks to seek protection in the fort. Thus, the ship Terpsichore arrived at the port of Drapanias, transferring Tombazis and 600 Greek volunteers from the mainland of Greece. The Greeks besieged the fort till May 25, 1823, when the Turks surrendered the fort and their weapons. The Greek flag was raised after centuries in Crete, but it lasted for a while…

The Turks moved to Chania, where they regrouped and returned to Kissamos. After a fierce battle, they managed to regain Castelli. In 1825, the fort returned into the hands of 900 Greeks, who came from Monemvasia, Peloponnese. They were initially heading towards Gramvousa fort fort, but the bad weather and the information that there were only 20 guards in Kissamos, led them to the siege the fortress at Castelli. However, after 3-4 days, 2000 Turks arrived in Castelli and reoccupied the fort.

During the great revolution of 1866, the fort was again a target of the rebels, led by Skalidis. The fort was besieged by the Colonel Vyzantios and the Major Froudarakis, but the siege stopped when the latter was killed. In 1897-8, the story was repeated, but the Turks were rescued by the Great Powers (Austria-Hungary, France, the German Empire, the Kingdom of Italy, the Russian Empire, and the United Kingdom), the “protectors” of the Cretan people. Today, the remains of the fort, most of which are remnants of the Turkish buildings, still stand in some places and remind us of its great past