Elyros was the most important town in southwestern Crete during the Doric and Roman Period (8th century BC - 4th century AD). Ruins are conserved 500m far from the village Rodovani atop the hill Kefala with the panoramic views to the South Cretan sea. The town was served by two harbours: Syia (current Sougia) and Lissos. The exact location of the town was verified by an inscription with the phrase in Greek "Glory to the people of Elyros" (έδοξε την πόλει των Ελυρίων). 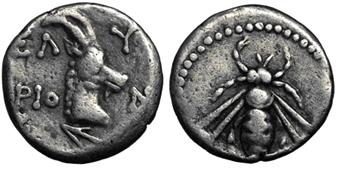 The coin of ElirosElyrians worshiped the god Apollo, the nymph Acacallis (Akakalida) and their twin sons Filandros and Fylakidis. According to tradition, after killing Python, Apollo fled to Tarra (current Agia Roumeli), where he mated with the nymph Acacallis. Acacallis then born the twin sons Fylakidis and Filandros, who were nursed by a goat. Hence, the Elyrians once sent a bronze goat suckling two infants to the oracle of Delphi.

Elyros was an industrial and commercial center of Crete and it was famous for producing weaponry. It minted its own currency, which certifies its power. The coins depict a goat nursing the sons of Acacallis and a bee. From Elyros came (according to one version) the lyric poet Thalitas (7th century BC).

After the occupation of Crete by the Romans, the town continued its vigorous history during the Byzantine period, when it also housed a Diocese. It was later destroyed by the Saracens. The most famous Roman finding was the Roman “Statue of the Philosopher” that is exhibited today at the Archaeological Museum of Chania. The statue was found on the site of an early Christian basilica, the floor of which is preserved.

Around the archaeological site of Elyros you will see several large cisterns, traces of buildings, a Roman aqueduct, part of the walls, a theater, and a turkish koules (defensive tower). Around the town, extends the town’s cemetery. In a neighboring position, near the village Moni, one can still visit the Grecoroman tomb with a shape of pyramid.

Church of Saint Eutychius at Tsiskiana

Church of Saint Irene in Sougia