The Minoan settlement of

The islet Scoglio de Muflo of the Venetians, which is the island opposite Mochlos, seems to have been a very important commercial center and port in antiquity till the Byzantine Era. The island is called Psilos (i.e.flea), opposed to the larger island to the west called Psira, i.e. lice and another islet opposite Pahia Ammos called Konida, i.e. lice egg (nit). Lastlt, the island is also called Agios Nikolaos, after the scenic chapel of Saint Nicholas, the patron saint of sailors.

Mochlos islet is a designated archaeological site that still gets excavated. The flourish of ancient Mochlos seems to have been interrupted abruptly when the island was separated from the mainland of Crete. Indeed, in the past the island was actually the tip of a narrow peninsula, across which two natural harbors were formed. In today’s sea area between the island and the mainland, where the depth does not exceed 2.5 meters, traces of Roman buildings have been found. 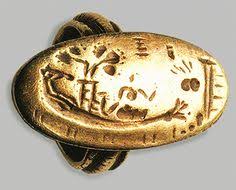 The golden ring of Mochlos The island was inhabited since the 3650BC and flourished in the Minoan era, as the natural harbor and the surrounding fertile plain were two strong advantages within an area with stormy seas and rugged mountains. Mochlos imported obsidian from Milos and raw materials from the East, with which it had close trade relations. Indeed, although the settlement was destroyed by the eruption of Santorini volcano, it was rebuilt. During the Roman times, Ierapytna owned Mochlos and fortified it to protect it from enemy attacks. Mochlos flourished until the Byzantine era, when it followed the fate of all coastal areas of Crete, which were abandoned because of the pirate raids.

Many tombs from all periods of the Minoan era have been found with important findings, such as seals, golden jewelry, pottery, vases of steatite, axes, a box for storing jewelry with a knife in the form of the dog, etc. The most important finding was a golden ring, which depicted a nude goddess, sitting on a strange ship and having left a small house across the rocky coast. Finally, there was found an entire area with workshops, the so-called "neighborhood of artisans”, where gold jewelry, gems and stone vessels were manufactured.

Church of Saint John the Apostle in Mesa Mouliana

Church of Saint Irene at Avgos