Ierapetra was not fortified by the Byzantines and the Venetians. Instead, it is the only town that was firstly fortified by the Turks, as they felt unsafe from the pressure of the local population. The wall of Ierapetra was low and circled the city only from the land, as the English traveler Spratt mentions.

The wall started east of the museum of Ierapetra, ran to Kothris Square, Mosque Square and ended at the area of Sarakina. The castle of Ierapetra had two gates, one on the north side, at the Town Hall Square, and a second on the west side, at the square of Mosque.

The wall was surrounded by a trench with water (2.5m wide, 1.5m deep), which the locals called hendeki. The walls of Ierapetra were repaired in 1823 and 1829.

In 1898, when the Turks abandoned Crete, the walls were torn down for aesthetic and political reasons, under the presence of the French admiral Potier. The admiral gave the signal for demolition to 1500 city residents, who destroyed everything that reminded the Turkish tyrant. Traces of the walls were later found near the Town Hall Square. 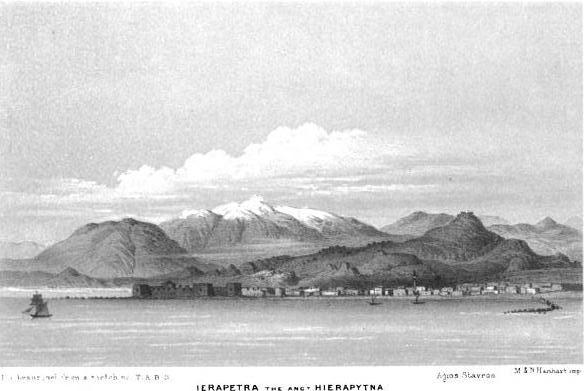