Thousands of kilometers of coasts carved by salt, the sun and the wind. Crystal waters exhausting the color palette of blue and green. Steep mountains which abruptly raise above the sea ... this scenery is met in all areas of Crete. The coastline of Crete is 1046 km long, with very well organized, and popular beaches, but also isolated, scenic and pristine.

In Crete, visitors can escape to one of the numerous hospitable, organized beaches located mainly in the northern coast that hosts the major tourist resorts. All those beaches offer visitors a wide range of services, amenities, security, cafes, bars, restaurants, water sports, lifeguards, etc. Most of them have been awarded with the Blue Flag for their safety, cleanness and immaculate amenities.

For romantics and adventure lovers, there are pristine beaches of incomparable beauty, especially in the southern coast. Small emerald heavens are reached after driving in serpentine dirt roads on the edge of steep slopes with breathtaking sea views, or after walking on ancient paths and crossing wild gorges.

Summer all year round 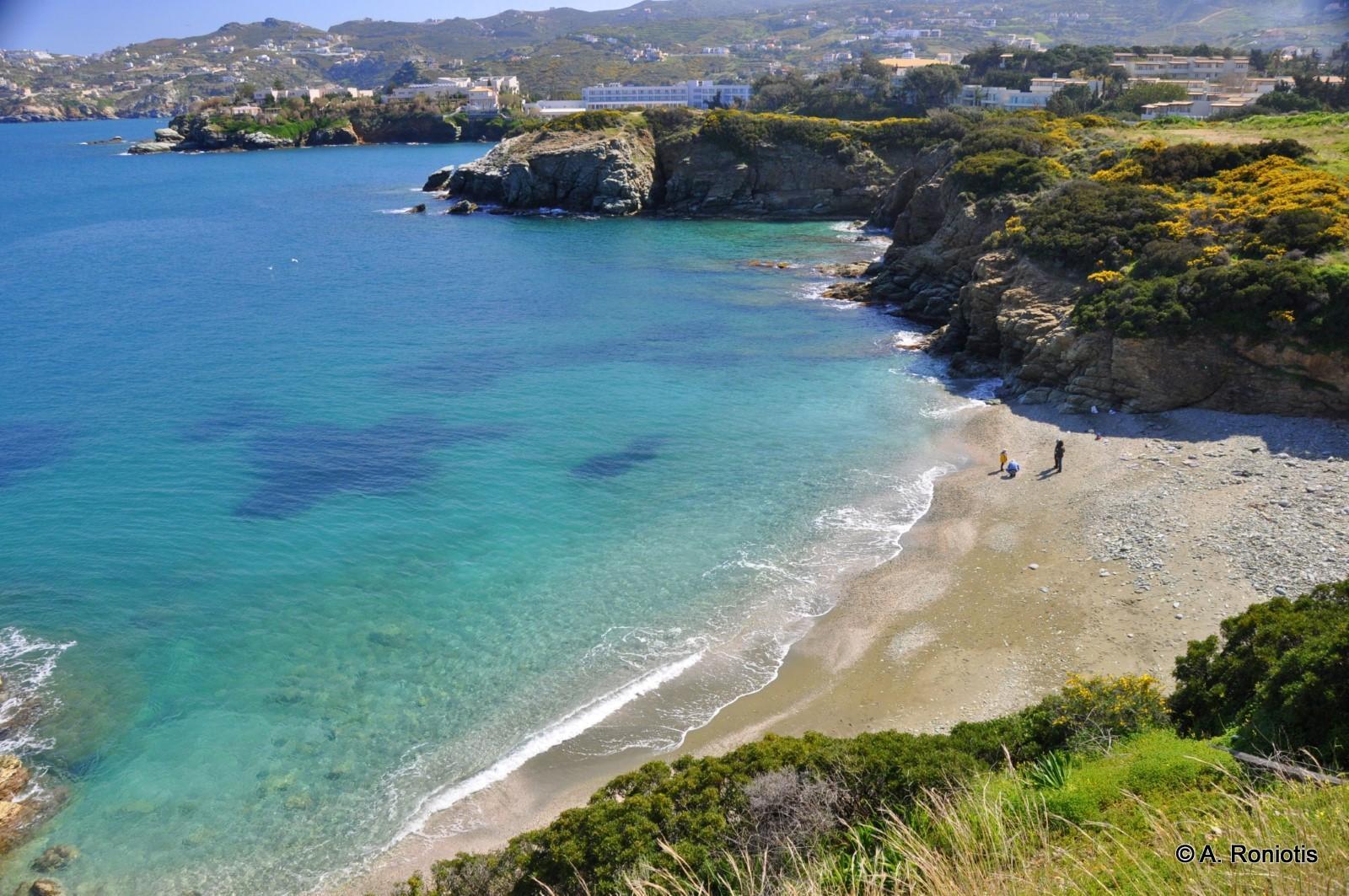 The winter in Crete is mild, while the spring and the autumn are soft and pleasant; the summer is warm and bright with cool breaks due to the northern winds (meltemi) of August. Crete falls into two climatic zones, the Mediterranean and the North African zone, mainly falling into the former. Learn about Crete climate.

Sea temperature rarely falls below 15 degrees Celsius in winter, especially to the south. Winter swimming with the whitewashed peaks of the Cretan mounts in the background is a unique experience and attracts an increasing number of fans.

The climate of Crete is considered as one of the finest, healthiest and mildest climates in Europe. One factor that plays a key role in the formation of the climate is the sea surrounding the island and alleviating the heat intensity of the summer sun. Ierapetra is considered the warmest Greek city and the coastline of the South Cretan Sea and Gavdos are the warmest in Greece. The southern coast, including the plain of Messara and the Asterousia Range, falls into the North African climatic zone and thus has many sunny, warm days all year round.

The wintertime is so mild that many swallows winter in southern Crete and Gavdos Island.

Lovers of crowded places, water sports, cocktails and parties on the beach have unlimited options due to the wide array of well-organized beaches in Crete. All beaches located near the major cities of the island generally offer all kinds of amenities such as sun beds, beach bars, showers, toilets, changing rooms, water sports and lifeguards. Most of them have been awarded the Blue Flag by the homonymous program that certifies beach cleanness, safety, accessibility for disabled people and infrastructure.

The beaches of Agia Marina, Stalos and Platanias are the most organized and popular ones and they are located near the city of Chania. Locals prefer the quieter, yet but equally organized beaches of at Kalathas, Marathi, Loutraki and Agii Apostoli. Quiet beaches offering all basic amenities are also met in other towns, villages and tourist resorts of Chania, such as Paleohora, Sougia, Kolymbari, Kissamos, Georgioupolis, Sfakia and Fragokastelo.

Other organized beaches of Rethymnon are located along the 8km long coast starting from the port of Rethymnon and end at Skaleta. Similarly, small towns such as Panormo and Bali, offer excellent services and facilities. To the south, the cosmopolitan beaches of Agia Galini, Plakias and Rodakino are fairly organized.

Heraklion in central Crete is the most developed tourist area, with Hersonissos and Malia,  hosting the largest numbers of tourists. Indeed, all coasts from Heraklion to Malia are fully organized and big resorts are built on the beach. Gyms, massage services, extreme water sports are just some of the services offered on the beach.

Lassithi (East Crete) beaches are quiet, but still organized. Apart from the beaches of the popular lagoon of Elounda that host prominent personalities from the fields of politics, media, sports and arts, all the beaches of the towns of Agios Nikolaos, Sitia, Makrigialos and Ierapetra are very well organized. Other options for relaxation offering basic amenities are the picturesque villages Mochlos and Myrtos, and the beaches of Kouremenos, Chiona and Kato Zakros. 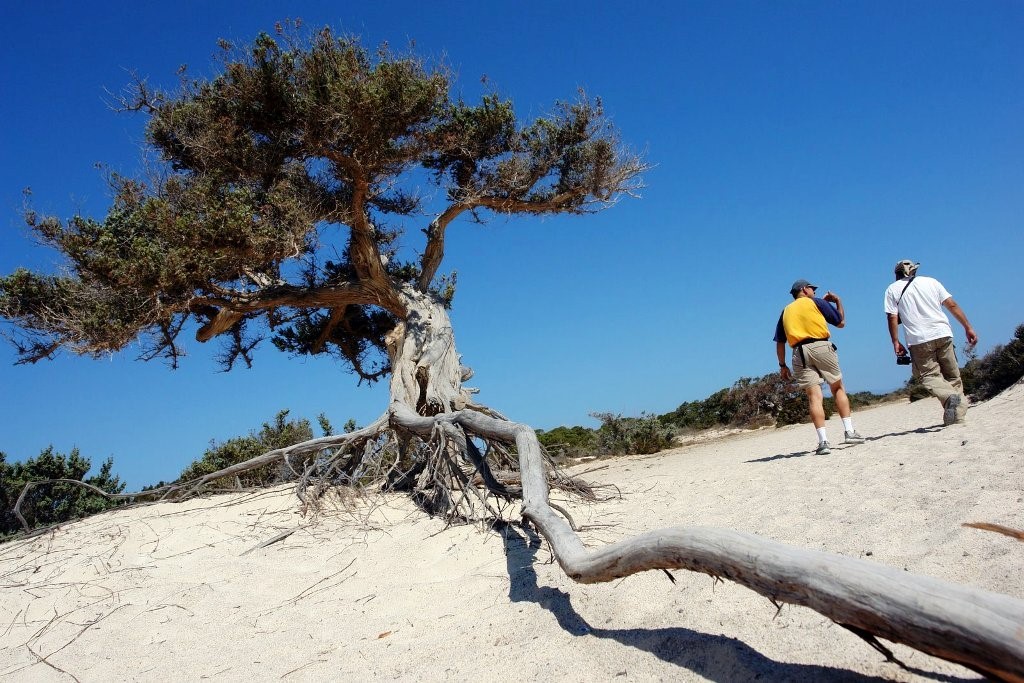 Travelers to Crete should explore the very important coastal nature. Development of tourism while respecting natural environment is a challenge for the authorities of the island.

The protected palm grove of Vai, the largest native palm forest in Europe, is an attraction of utmost ecological value. Beaches with Cretan date palm are met in more places of the island, such as Preveli and Plakias.

Moreover, the protection of junipers is of outstanding ecological value. Those trees grow very slowly and breaking a small branch actually means the destruction of some centuries of development. Reserves of junipers are primarily found in Elafonissi, Gavdos, Chrissi and Falassarna.

In the fall, sand dunes are smothered with white lilies (sea daffodils). Lilies were a favorite pattern in the Minoan frescoes.