Omalos is located 38km south of Chania at an altitude ranging from 1,040 to 1,250 meters, surrounded by the high peaks of the White Mountains. The plateau is particularly beautiful in the winter, when it is frequently covered by snow. At older times, the plateau of Omalos was the shelter of the locals and the base of rebels during the two and a half centuries of the Turkish occupation, but also during all other wars against invaders. Moreover, locals grew grain and potatoes and there were many shepherd huts and "mitata" (cheese-dairies) where the marvelous cheese of the area was produced. During the German occupation in the Second World War, a small airport was also operating in Omalos for a short time.

Today, Omalos, and specifically Xiloskalo (1250m), is the starting point for the thousands of visitors of the famous 18km long Samaria Gorge. In Xyloskalo you’ll see the forest guard kiosk and the information center (museum like) about the White Mountains and the National Park of Samaria.

One of the most beautiful routes in Lefka Ori is the climbing of Gigilos, taking two and a half hours of walking. This route is quite easy. Half-way to Gigilos (one hour from Xyloskalo), there is the spring of Linoseli (Seli of the Hellenes) where the water at 1,500 m high is ice-cold during all seasons of the year. At ancient times there was a famous Oracle there. Just before that, there is the Demonospilio (cave of deamons), which according to a tradition was the den of deamons. In Gigilos there are many climbing routes that have been mapped out by Greek and foreign alpinists. More than 10 cave gulches tear rip down the aurface of the mountain, the deepest of them with 115 meters vertical descent, found when climbing towards the peak.

Southeast of the plateau a mountain road five kilometers long, leads to the mountain shelter of Kallergis, at 1,680 m height. From there the view of the Cretan and Libyan sea, of the Samaria gorge and the island of Gavdos is magnificent. From the lodge one can continue mountaineering across the Lefka Ori to Sfakia and elsewhere.

When going down the plateau, on our right hand there is the large cave-gulch Honos or the cave of Tzanis, where there was the den of the chieftain Tzanis Markos during the first years of the Turkish invasion. He was also called Fobos (fear), as he was actually the fear of the invaders. This cave was explored for the first time by speleologists from Chania and France. Its length reaches 2,5 kilometers, the height distance from the entrance to the depth is 241 meters and forms a huge covered gorge. 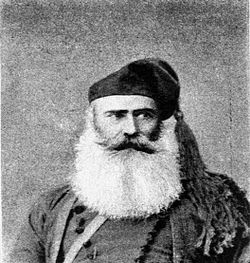 Opposite the entrance of the cave of Tzanis, on a small barrow, there is the Tower and the church of the famous chieftain and semi-god of Lefka Ori, Hadzimihalis Yiannaris. He was a rebel from the village of Lakki, born in 1833 and died in 1916.

Hadzimihalis Yiannaris was buried honored as a general, here in Omalos according to his own will, in his old "lairs". He was great in appearance and in soul and served as a general leader of the county of Kydonia in Chania from 1866 to 1898. Hadzimihalis Yiannaris was one of the pioneers in the uprisings of 1855 and 1856 and one of the major contributors of the great uprising of 1866-1869. He had been imprisoned many times by the Turks, but he always managed to escape. In such a hard and impossible escape from the fortress of Firkas in the town of Chania in 1860, he vowed on the success that he would build the small church of Agios Panteleimon here in Omalos next to the Tower that later became his grave. Hadzimihalis Yiannaris was for some period an exile in Odessos in Russia. In 1912 he became a member of the Parliament and member of the government of the Autonomous State of Crete. On December 1, 1915, he handed the flag the king of Greeks to be raised in the fortress of Firkas for the official of the island of Crete with the rest of Greece.

Church of Saint Eutychius at Tsiskiana

Published in Plateaus and Plains
More in this category:
Tweet
back to top