Sitia Global Geopark, added in 2015 in UNESCO Geoparks, is located on the easternmost edge of Crete. It has abundant mammal fossils of the Pleistocene epoch (dating back from 2.6 million years to 11.700 years ago). The Geopark seat includes the wider area of Zakros, where an information centre operates and a guesthouse is located in village Karidi that can accommodate 20 persons.

Geology
The geology of Sitia Global Geopark includes distinctive characteristics that make it unique and of international value. The abundant Pleistocene mammal fossil sites, the discovery of three Deinotherium giganteum fossils, the extensive cave systems, as well as the palaeo-shorelines of Zakros area are unique for Crete and of national importance. Almost all rocks in the region are of sedimentary origin, a fact that indicates the existence of several kinds of fossils and few significant mineral resources. Fern remnants of carboniferous age are to be found in some place, several species of Pleistocene mammals (deer, hippos, elephants etc.) along the coastal zone, whereas a great number of marine fossils exist within the Neogene sediments. The most profound geological feature of the area comprises the abundant karstic structures on the limestone environment. In the broader region more than 170 caves and many gorges have been recorded to date. This unique speleological park is a real paradise for speleologists, biospeleologists and other researchers of the subterranean world.

Geography
Sitia Global Geopark is on the easternmost edge of Crete, in the province of Sitia. The total area of the Global Geopark is 517 km2 and it extends from cape Cavo Sidero, in the north, to the southern coast of the Sitia province, the edges of the city of Sitia, to the west, and the coast of Zakros, to the east. It is mainly a mountainous area, with the Zakros Mountains dominating the landscape and the lace-like coastline all along the shores. 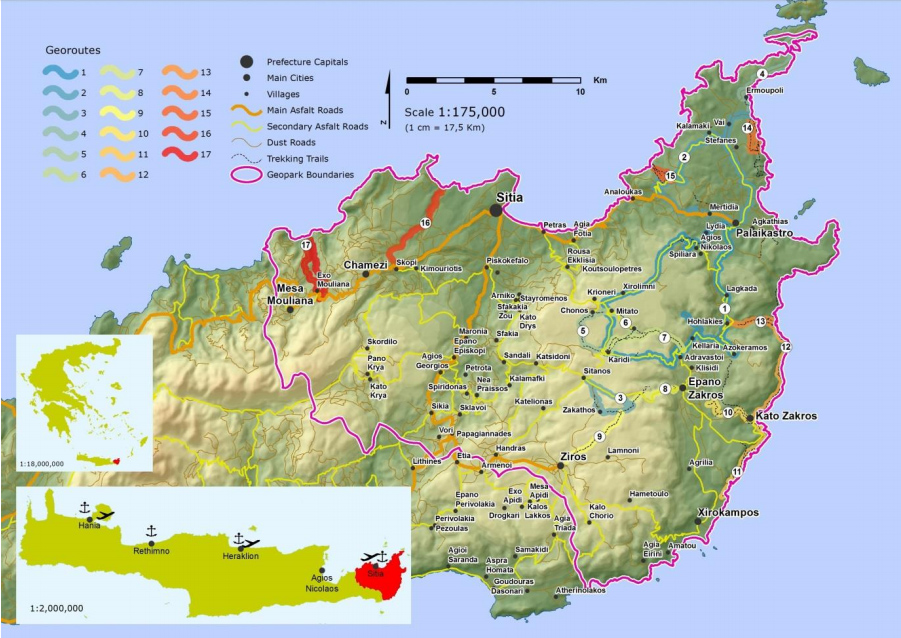 The cave of Pelekita is located at an altitude of 100m, at the foot of Traostalos Mount, well hidden within the bare rocks of the wild landscape of Zakros. The entrance of the cave is located 5 km northeast of Kato Zakros, in the position Pelekita or Sikia. To reach the cave, the visitor has either to walk one hour from Kato Zakros or one quarter by coming from the sea.

The Cave Dadoulas or Maxime is an underground river at Dadoulas area by Vrysidi settlement. It has a total routes’ length of 760m, depth of 260m and ends at a siphon (well). It has very rich decor and is characterized as a "living museum of the geological history” of the region.

At position Patelia, about 1 km NW of Sitanos we meet the large cave of Oxo Latsidi, formed in Jurassic limestone. It was originally accessible for 50m. It was later studied by Paul Faure and mapped by Eleftherios Platakis and Ioannis Tsifetakis, who found a long tunnel 360m long. After the entrance we meet a room (34m x 16m) and a chamber on the right (32m). On the left, for 330m extends the tunnel with a width of 2-8 m and a height from 0.5m-1.5m. Recent surveys give the cave a longer length of up to 1.000 m. The different flows of water give the impression that it was once an underground riverbed. Generally the decoration is poor.

The Cave Fovolies is located north of Atherinolakos at position Fovolies. It is located next a a Minoan settlement. It is a small cave and easily accessible.

The cave Chonos Sitanos is a sinkhole near Sitanos where there are many caves. The total length of the routes in the cave is 400m and the maximum depth is 94m.