If we had to distinguish the 5 most beautiful among the thousands of caves in Crete,  one of them would certainly be the cave of Kamilaris at Tylissos near Heraklion. This not-so-well-known cave is a true wonder of nature that has been sculptured by water beneath the surface of the earth for centuries. It is not so easy to locate it because, despite being almost on the road, there is no informative signpost that can lead us to it. Its entrance is located almost on the old national road connecting Heraklion to Rethymnon, shortly after the junction that follows the traditional village of Arolithos and before reaching Voulismeno Aloni. 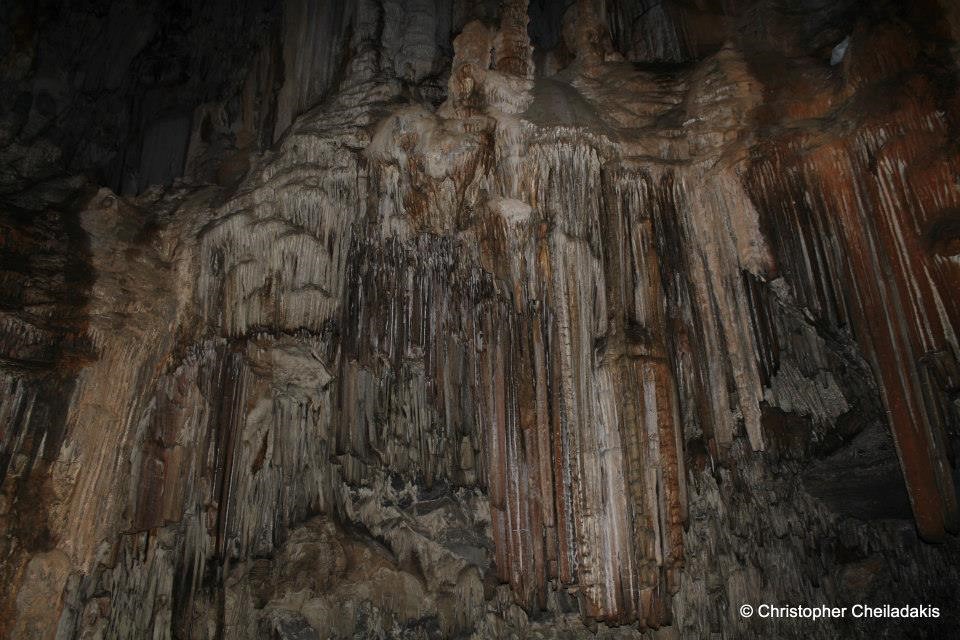 Despite its typically large rectangular entrance, 10 meters wide and 4 meters high, it is not easy to locate because it is hidden by a carob wood and rocks. The only characteristic that indicates where the entry is, is a sheep paddock. In fact the cave is part of the sheepfold and in order to get inside we have to overcome the fence that has been set up to deter the animals (and probably the tourists). The existence of the cave is unfortunately intertwined with the presence of the adjoining paddock and this is indicated by the tragic condition of the Kamilari cave. The first large and spacious room of the cave is still used today as a paddock and as a storehouse for any garbage, rubbish and all sorts of objects such as barrels, tanks, nylon bags and anything else.

Immediately after the first spacious room, the cave changes shape and creates a vertical fall of 4 meters preventing the visitors. However, this obstacle has now been overcome by the installation of an auxiliary wire rope, enabling the descent into the interior. After the descent, the interior and decoration of the cave are hard to describe. The words "rich decoration" are really too poor to describe the colorful scenery that the stalagmites and stalactites form everywhere, in every part of the cave, in the three chambers following the first. But what makes Kamilari's décor even more impressive is its colors and its dramatic alternations. Particularly impressive are some blood-red splashes or some of the most beautiful "balconies" in all of Crete, while in other places the rocks are white like milk. Generally in the cave we will meet almost all kinds of stalactites found in the caves of Crete.

At the same time, with the imposing beauty of the cave in every step of us, the trash from the paddock has been invaded almost every part of it. The amount and magnitude of pollution inside the cave is truly inconceivable to the common mind, while it is almost impossible to move without stepping on rubbish. The cave also had a second section that we now meet to the right on the old highway, which despite its vast breadth and depth, the shepherd managed to fill it up to the top with trash and then, after it was filled with trash, he expanded his crime to the main cave. 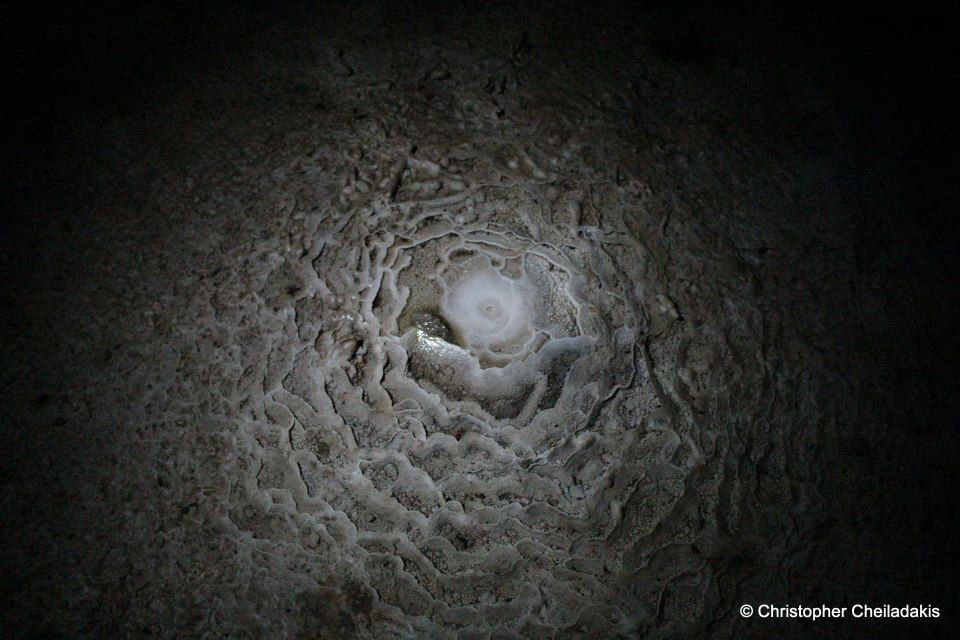 In the first easy-to-access and spacious hall of the cave, illuminated by sunlight, the roof is blackened by smoke since antiquity. After the steep descent, we follow quite a downhill course as the slopes along the cave are quite steep. This spacious cave reaches a total length of 200 meters, making it one of the largest in Crete. Humidity is high in many parts of the cave, that is still active, and continues to produce stalactites and stalagmites. Inside there is a large colony of bats and in many places we will see animal bones.

The Kamilari cave has attracted humans since the Minoan era and was used as a religious cave, until at least the Roman era, according to the findings that have come to light, which include potsherds that date back from the Late Minoan period to the Roman Times. If a similar cave with such unique natural beauty and archaeological value existed elsewhere in the world, the only sure thing would be that it would be a protected monument and not a trash pit.

Church of Panagia Kera at Tylissos

Church of Christ the Savior at Tylissos