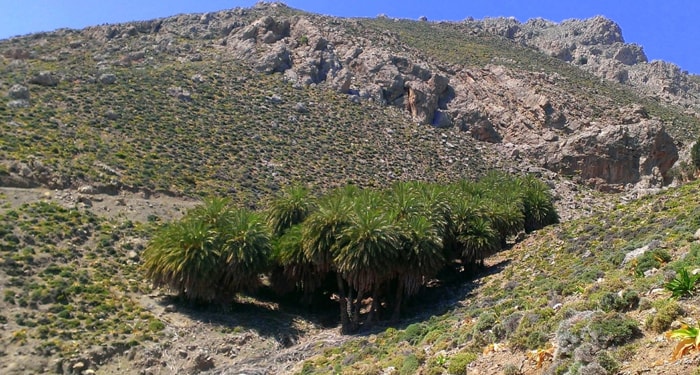 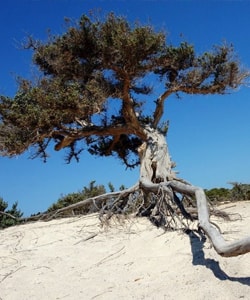 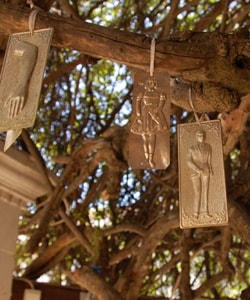 Malotira (Sideritis syriaca), also known as Cretan Mountain tea is a herbaceous plant or shrub, 10-50cm long, which is met at ranges over 900m in West Crete (over 900m). The species is endemic to Crete and the name syriaca (instead of cretica) probably comes from a confusion of the botanist who gave the name.

Dittany (Origanum dictamnus) (Greek: diktamos) is an endemic herb of Crete, the most famous of all, which is mainly used as a tea and as a therapeutic sip. Its name is taken after the Dikti Range (Lassithi Mountains), though it is also met in all ranges of Crete.

Cretan zelkova (Greek: Anegnoro or Ampelitsa) (scient. Zelkova abelicea) is an endemic bush or small tree of Crete as high as 3-5 meters. It constitutes a unique species of the genre Zelkova, of the family Ulmaceae and is characterized as a living fossil. It took the name "Anegnoro" (i.e. unknown) because when it was discovered, nobody knew its species.

The holly or Kermes oak is a species that resembles common oak. In Crete it is met in all mountainous regions and is one of the most common trees. The oaks are met in ranges of Crete, as they can grow in rocky and dry soils and withstand the extreme weather conditions there. Indeed, the beautiful oak forest of Rouvas is the largest grove of oaks in Europe.

The plane tree can be met in every place of Greece (valleys, ravines, lakes, river banks and village squares). It also found almost everywhere in Crete and is one of the most typical plants of the Cretan flora. Perhaps no other tree, except the olive tree, is so closely associated with the daily life of the Cretans, as the plane tree because has been the spectator of all historical local events.

The carob tree can be met everywhere, even on the sidewalks, because of the dense shade and the zero care it needs. Its name (ceratonia) means horn in Greek and is taken after the shape of its edible seed pods. Carob tree can reach a height of 18m and the age of 100 years, while its leaves are round, hard, dense and frost- tolerant. It grows in the arid and rocky coastal areas of the island at an average distance from each other.

The cedars of Crete (Juniperus macrocarpa and Juniperus phoenicea) form some of the most important ecosystems in Greece, the cedar groves on the dunes of southern Crete. The ecological importance of the dunes is enormous for the biodiversity and the existence of rare animals and plants.

The palm of Theophrastus (Phoenix theophrasti), also known as Cretan Date Palm is a rare endemic species of the Aegean Sea, which is met all over Crete, in several Aegean islands and in Antalya (southwestern Turkey).